Kevin Love Responds to Criticism He’s Received: ‘I Don’t Really Give a S—‘ 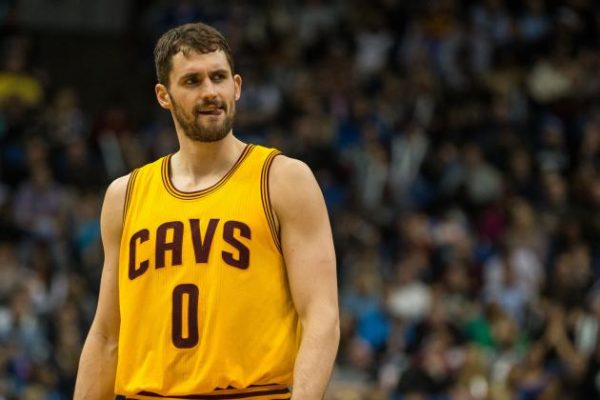 Less than a month away from receiving his first NBA championship ring, Cleveland Cavaliers forward Kevin Love has taken a different approach towards dealing with his legion of critics. These critics are the same ones who have deemed him a wrong fit for the team and have wanted him traded to virtually every team in the league since he first arrived 26 months ago.

As part of the defending NBA champions, Love now offers a simple answer.

“I love this team, love the coaching staff, my teammates, the organization. I mean, I don’t think it will ever leave but frankly, I don’t really give a s—.”

Asked to elaborate by Dave McMenanim of ESPN, Love offered an acknowledgement of his status with those critics.

“They’ll never be gone,” Love said. “That’s just something that you live with. We have so much hype and media and the good and the bad surrounding this team and it just comes with the territory.”

Having gotten used to being mentioned in a multitude of trade proposals, Love is thinking long-term stability amid such annoyances.

Current Cavaliers head coach Tyronn Lue certainly has no plans of dealing him away after helping inspire him to put up impressive numbers during the first three rounds of the last year’s postseason. He believes now that with no more pressure to deliver a title, Love can flourish.

“It looks like the monkey is off his back because we won a championship,” Lue said. “Going through it last year, winning a championship and being a big part of what we do (was big for him). Those first three rounds he was unbelievable. I thought LeBron did a great job of letting Kyrie and Kevin really emerge in the playoffs those first three rounds. They got all the confidence in the world and it was big. Now we have to keep building from there.”

Lue continued on to talk about how he’s especially appreciative of Love’s willingness to offer a more team-first focus, demolishing his previous reputation as someone more concerned about personal statistics.

“Y’all keep asking the same question,” Lue said. “It’s sacrifice. When you have three great players, everybody is not going to have the ball and have the same numbers they had on other teams. It’s like when Chris Bosh went to Miami. That’s how we’ve got to treat Kevin. It’s the same way. That don’t mean he’s not a great player, it means he’s the one who’s got to sacrifice. To win you have to do that.”

For Love, another dismissal of critics who criticized his defense came in the final minute of Game 7. His harassing defense of the Golden State’s Stephen Curry forced a poor shot and helped the Cavs clinch the title.

The man who hit the clinching free throw in that game, teammate LeBron James, doesn’t detect any difference in Love’s approach.

“He’s the same Kev to me,” James said. “Maybe he’s different to you guys because you guys bring up that notion (of how he fits in), no one wants to hear that right now. He’s a huge piece to our team, he’s one of our Big Three, and when we all perform well, you see what happens. You see in Game 7 when we all came to play, played at a high level, so we was able to bring that home.

“But, you know, he looks unbelievable, he’s in shape. Not that he’s ever been out of shape, but he’s in great form shooting the ball extremely well, great command of what we’re doing, he’s a good leader for our team.”

Even though he no longer feels the need to answer his critics, Love hasn’t lost a desire to take part in another championship run.

“Of course hanging a banner is huge for us and I shook all of your guys’ hands at the parade, it was an amazing time,” Love said. “But now it’s back to work and we’ll do it all over again. So, let’s go to work.”

Love will get his first chance to show off his new approach when the Cavaliers open the season on October 25.