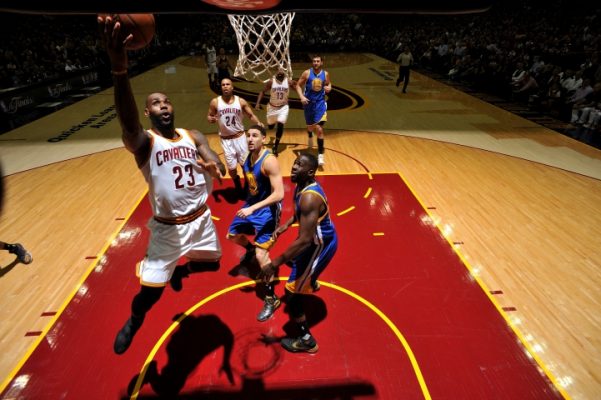 (Cleveland, OH) – Taking advantage of hot shooting in the first and third quarters, the Cleveland Cavaliers led from start to finish to win for the first time in the 2016 NBA Finals with a 120-90 victory over the Golden State Warriors on Wednesday night at Quicken Loans Arena.

The win prevented the Cavs from being put in a virtually insurmountable position and offers them the opportunity to knot the series at two games apiece on Friday night.

“Physicality and aggressiveness. I thought we were physical on defense and aggressive on offense,” Cavaliers head coach Tyronn Lue said after the game. “That’s how we have to play.”

The trio of LeBron James, Kyrie Irving and J.R. Smith combined for 82 points on the night. James scored 32, added 11 rebounds to pick up a double-double and dished out six assists, while Irving scored 30 and added eight assists. Smith warmed up for the first time in this series by hitting five three-pointers and finishing with 20 points.

“My teammates have been telling me to stay aggressive,” Smith said. “Since we landed the other day, it’s been just kind of a clean slate.”

Also contributing a standout performance was Tristan Thompson, who also picked up a double-double with 14 points and 13 rebounds.

“The coaching staff gave us a great game plan and we executed it for 48 minutes,” James said immediately following the game. “Kyrie got us going in the first quarter.”

In that first quarter, Cleveland sizzled at a 71 percent rate (15-of-21) on their shot attempts, then came out energized following intermission to scorch the nets again at a 75 percent clip (15-of-20) in the third quarter.

The Cavs’ torrid start allowed them to score the first nine points of the game, boost their lead to 19-4 and then take a pair of 20-point leads before ending the quarter ahead 33-16. In that opening quarter, Irving scored 16 and James eight points.

“I can’t play in between or be indecisive.” Irving said. “I just have to constantly be in attack mode.”

However, in the second quarter, the Cavs came close to squandering their effort by hitting just 22 percent of their shots. Due to the frigid offense in the second period and the Warriors hitting on 12-of-18 on their second period shot attempts, Cleveland headed to halftime with a 51-43 lead.

One of the key reasons for the first-half lead was the aggressive approach that was lacking in the first two games of the finals. The Cavaliers defense forced 10 turnovers, scoring 21 points off of them, and they controlled the offensive side of the boards with a 10-3 advantage.

“From the get-go, we wanted to lay the wood down, play hard, compete, be the hardest working guys on the floor,” Thompson said. “That’s what we did tonight.”

The halftime break helped the Cavs get going on a 19-5 run to start the third quarter and allowed them to take an 89-69 lead into the final period. The Warriors never threatened to make a game of it in the fourth and watched their five-game postseason winning streak come to an end.

“We talked about effort for the last two days and we brought that tonight,” Lue said. “When we play that way we’re tough to beat.”

One area of concern for Cleveland could be the fact that they had no points from their bench until early in the fourth quarter and tallied only 15 points in that department for the night. Despite that output, Lue wasn’t concerned.

“I thought our bench came in and had a great defensive effort,” Lue said. “They competed and that’s all you can ask.”

Game 4 will tip off just after 9 p.m. ET on Friday night.