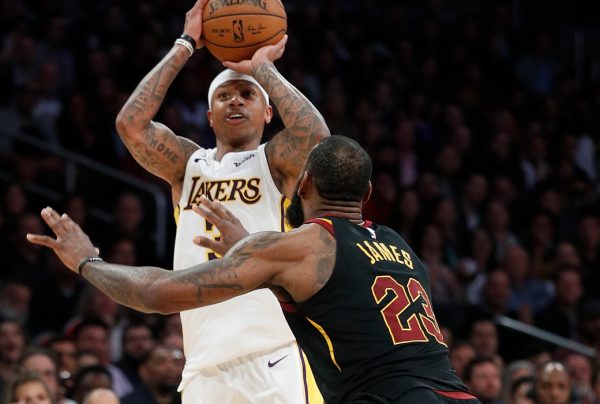 Being traded away from any team often has a tendency to increase the motivations of the player dealt, which is apparently what happened with former Cleveland Cavaliers point guard Isaiah Thomas on Sunday night. Playing for his new team, the Los Angeles Lakers, Thomas appears to have savored getting revenge on the Cavaliers, who lost 127-113.

Thomas himself didn’t offer that opinion. That came on Monday from his new teammate, Kyle Kuzma, who discussed (approximately two minutes into the video) Thomas’ apparent emotions during the contest:

“He was barking at Cleveland’s bench the whole time, every time he scored, so that was cool,” Kuzma said.

Kuzma was then asked if it was fun to see Thomas’ motivations in action:

“He was only there for 15 games, but it was good to see him try to kill them,” Kuzma said. “We have a saying, ‘Your last team, they didn’t want you.’ So he took it to them, and he did a great job.”

During Sunday night’s game, Thomas came off the bench and played 31 minutes. During that time, he scored 20 points, handed out nine assists and grabbed five rebounds. The Lakers led for virtually the entire game and pulled away with a 22-3 run during the third quarter.

The Cavaliers return to action on Tuesday night when they face the Phoenix Suns in the fourth game of their six-game road trip.