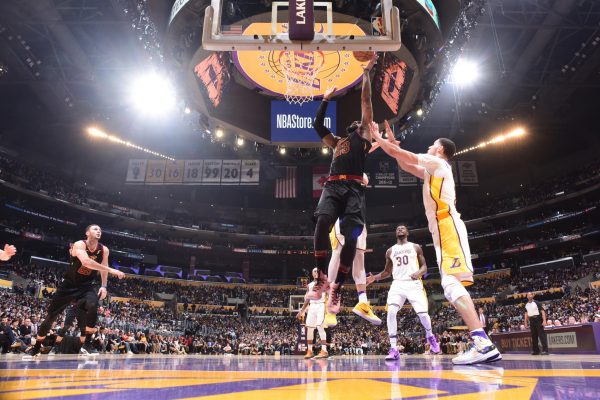 (Los Angeles, CA) — Being on the receiving end of a 22-3 run during the last five minutes of the third quarter sent the Cleveland Cavaliers to their second straight defeat as they fell 127-113 to the Los Angeles Lakers at Staples Center on Sunday night. The loss dropped the Cavs into fourth place among teams in the Eastern Conference, one half-game behind the Indiana Pacers.

The Lakers had held a 72-63 lead with less than three minutes gone in the second half, which resulted in a Cavaliers response that saw them run off nine unanswered points to tie the game. Another tie at 76 then sparked the Lakers’ devastating run that began by the hosts scoring 11 of the next 12 points. By the time the quarter ended, the Lakers led 98-82, with the depleted Cavaliers falling behind by as many as 22 points.

“You’ve gotta get the most out of whoever’s playing,” LeBron James said about the Cavs’ current limited roster. “It’s next man up, but sometimes you just fall short.”

Cleveland was dominated on the glass during the game, with Los Angeles holding a 51-37 advantage on the rebounding front. That futility, the byproduct of injury-related absences in the Cavaliers’ frontcourt, was especially seen on the offensive boards. The Lakers grabbed 14 rebounds in that department, compared to the Cavs’ seven.

“I think the rebounding hurts us, not having physicality on the block, not having enough bigs, having to double team the post a lot and scrambling around,” Cavs head coach Tyronn Lue said about the current woes the team is facing. “That’s what we have to do right now, so no excuses.”

James, who sat out the fourth quarter, collected a double-double to lead the Cavaliers, scoring 24 and picking up 10 rebounds, while also handing out seven assists. Larry Nance Jr. ended his night with 16 points and eight rebounds, while Jose Calderon was the only other Cavs player to reach double figures in scoring with 10 points.

“We couldn’t get stops, we were breaking down defensively,” Nance said.

Former Cavalier Isaiah Thomas got some revenge on his former teammates by scoring 20 points, handing out eight assists and collecting five rebounds off the bench. Conversely, Cavaliers starters Jeff Green and J.R. Smith combined for just 10 points and struggled from the field, shooting a collective 3-for-15 (20 percent).

“It’s tough, we’ve got a lot of young guys and different lineups, but we have to be better,” Lue said.

The Cavaliers had some early struggles to begin the game, missing 8-of-11 from the field to twice fall behind by five points. While they warmed up for the final minutes of the first period, connecting at a rate of 62 percent (8-of-13) from field, their defense had some trouble keeping up with the Lakers, who collected 11 assists in the quarter. That helped Los Angeles hold a 33-29 advantage after 12 minutes of action.

“We have to be more aggressive offensively,” Lue said. “We can’t keep settling for 3-pointers and jump shots.”

Both teams effectively matched each other during the second quarter when it came to shooting from the field, with the Lakers continuing to hold the Cavaliers at bay. Each time Cleveland made a run, Los Angeles would put an end to it and build its lead back up. By the halftime had arrived, the Lakers held a 65-60 lead, adding eight more assists to their total while drilling six 3-pointers.

The Cavaliers’ road trip continues with a Tuesday night contest against the Phoenix Suns that will tip off just after 10 p.m. ET.