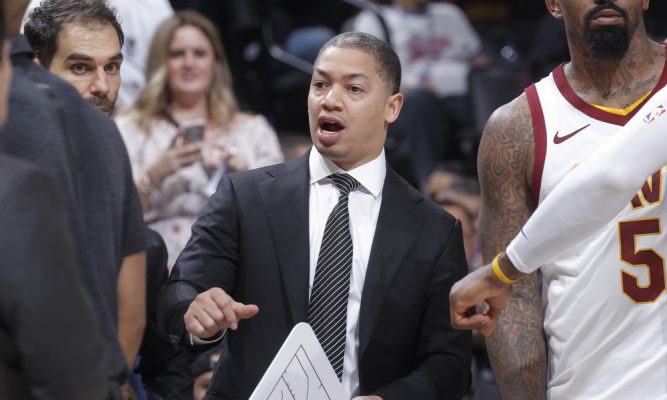 Keeping opposing teams guessing on defense is one of the ways to win in the NBA, with Cleveland Cavaliers head coach Tyronn Lue indicating on Monday that his team’s repertoire of offensive plays is in need of an update.

The impetus for Lue’s changes was the Cavaliers shooting just 42 percent from the field in their Sunday afternoon loss to the San Antonio Spurs. Lue specifically cited how the Spurs focused heavily on LeBron James and made things difficult in half-court situations.

“Not being able to run a lot of stuff,” Lue said of the Spurs game, according to ESPN’s Dave McMenamin. “They did a good job of switching and putting anybody on Bron — putting Patty Mills, putting [Bryn] Forbes, you know, putting Tony Parker [on him]. So we drew [up plays showing] where we want guys to be and it’s going to be a process and we’ll continue to get better at that.”

McMenamin explained how the new strategy will take shape:

“Lue introduced an offensive structure that starts with feeding the ball to the elbow and has ‘six or seven’ options to pursue from there, depending on how the defense reacts,” McMenamin wrote. “In the starting unit, the elbow feeds — while Kevin Love is hurt, at least — will flow through LeBron James. With the second unit, those touches will go through Larry Nance Jr. or Jeff Green.”

While indicating that the Cavs’ four newest players: Nance Jr., George Hill, Jordan Clarkson and Rodney Hood should be more willing to shoot the ball, Lue indicated that Hood and Clarkson will be important aspects of these implemented changes:

Hood agrees with the idea, indicating that a more aggressive attitude is needed:

Lue spoke about the value of using the Cavaliers’ off day on Monday as a way to implement those new strategies:

“I thought today was a good day, a good teaching day,” Lue said. “I was able to add some more stuff offensively because right now with only two or three practices, we’re predictable offensively and teams are kind of sitting on that and taking advantage of that.”

The first opportunity the Cavaliers will have to see this new plan in action will be Tuesday night, when they host the Brooklyn Nets in a game that will tip off just after 7 p.m. ET.