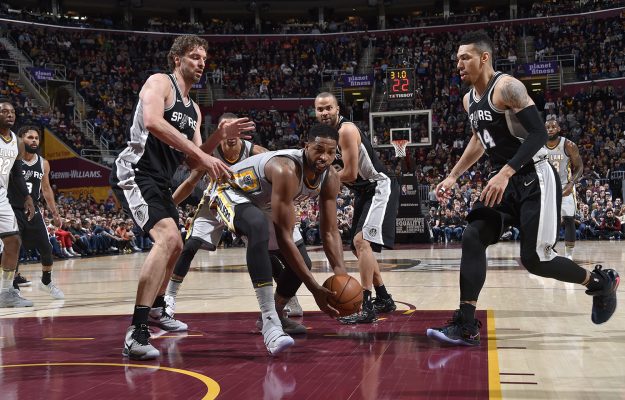 (Cleveland, OH) — Giving up 16 unanswered points in a four-minute span proved to be devastating to the Cleveland Cavaliers as they dropped a 110-94 decision to the San Antonio Spurs at Quicken Loans Arena on Sunday afternoon. That deadly stretch came in the final minute of the third quarter and the first three minutes of the fourth.

The push by the Spurs turned a three-point Cavs lead of 74-71 into a 13-point deficit at 87-74 with 9:22 to go in the contest. The closest the Cavaliers would get after that would be eight points after Kyle Korver hit from long-range with 4:47 left to make it 96-88. However, the Spurs needed just 21 seconds to answer that bomb with one of their own, part of a 14-6 run to close out the game.

The up-and-down struggles since resuming play came as no surprise to LeBron James, who had previously indicated that some potential struggles were ahead:

In that disastrous final period, the Cavaliers delivered some painful self-inflicted wounds that cost them the game. The team shot just 35 percent (8-of-23) from the field and committed six turnovers, while also allowing the Spurs to connect at a 52 percent rate from the field. The Cavs’ shooting in those final 12 minutes got off to a rough start as they missed their first five field-goal attempts.

Cavs head coach Tyronn Lue spoke after the game about the 15 turnovers committed by the team during the contest:

“It’s part of the game, but we can’t have careless turnovers,” Lue said.

James led all scorers with 33 points, collecting a double-double by grabbing 13 rebounds and again narrowly missing a triple-double with nine assists. Jordan Clarkson and Jeff Green were the only other Cavaliers to reach double figures in scoring, picking up 17 and 14, respectively.

Tristan Thompson scored six and picked up 13 rebounds off the glass, though only four of those boards came after the first period. The Cavaliers’ offensive woes had the other four starters besides James contribute just a combined 14 points on the afternoon.

Over the course of the game, the Cavaliers struggled from deep, hitting just 8-of-34 (24 percent) from long-range.

“We’re not looking for threes, we’re just looking for a good shot on that possession,” James said. “They just didn’t fall today.”

Expressing criticism after the game, James was annoyed about the 32-14 edge in free-throw attempts the Spurs had during the game. During the contest, he was assessed a technical foul after not getting a call.

“We protect the shooter,” James said. “Chicks dig the long ball and that’s what it’s about.”

That late dry spell for the Cavaliers continued for a good portion of the third as they missed 10-of-13 from the field to start the second half. That helped San Antonio go on a 15-6 run to take a 65-59 lead, though a trio of 3-pointers by Clarkson a short while later would briefly give Cleveland a brief lead back at 74-71. Unfortunately, the Spurs tallied those last five points of the period and held their two-point advantage entering the final quarter.

“Drive the basketball, post up in the paint I think we had 50 points in the paint.” Lue said when asked how to improve the team’s offensive performance, “But still, we didn’t make outside shots. They (Spurs) do a good job of switching and double-teaming when we get mismatches on the block. When they do that, we know we have to make shots and we didn’t do that tonight.”

The Cavaliers remain at home when they return to action on Tuesday night when they take on the Brooklyn Nets. That matchup will tip off just after 7 p.m., the second contest of a five-game homestand for the Cavs.