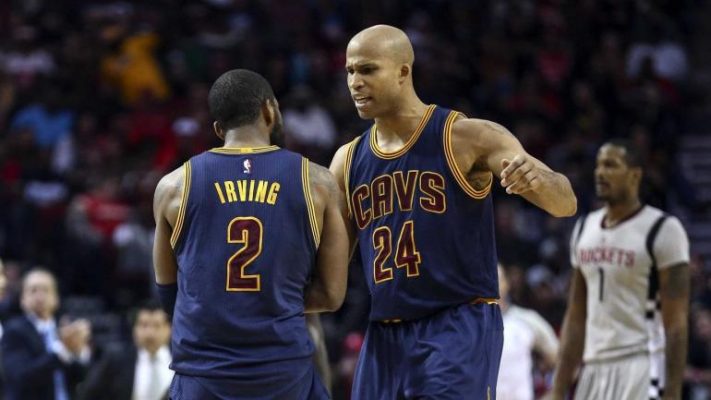 Former Cleveland Cavaliers forward Richard Jefferson recently revealed the exact reason why Kyrie Irving requested a trade from the Cavs in the summer of 2017.

While many had originally thought that the main reason was Irving wanting to play out of former teammate LeBron James’ immense shadow, Jefferson is saying there was another culprit.

Jefferson recently revealed that Irving wanted out of Cleveland due to the point guard finding out about a trade that almost went down. The Cavs were reportedly in talks to trade Irving to the Phoenix Suns in a three-team deal, according to Jackie MacMullan of ESPN:

“In mid-June, shortly before [former general manager David] Griffin left, team and league sources confirm, the Cavs explored a three-way deal with Phoenix and Indiana that would have shipped Irving and [Channing] Frye to the Suns and brought Eric Bledsoe and Paul George to Cleveland. The Suns resisted, unwilling to part with their No. 4 pick, which they planned to use to draft Josh Jackson.”

This is what ultimately led to Irving’s trade request being leaked about a month later, which brought Isaiah Thomas, Jae Crowder, Ante Zizic, and Brooklyn’s 2018 first-round draft pick, which turned into prized rookie Collin Sexton.

“The reason why [Kyrie wanted out] was because there was a trade. That’s why he wanted to leave,” revealed Jefferson. “Once he found out that he was on the trading block and a trade almost went through, he was like, ‘I’m gone and I never want to come back here.'”

As Jefferson was actually in the locker room while all of this went down, it’s not that difficult to take this at face value. James is known to be one of the selfless superstars in NBA history, and this story helps alleviate any concerns of James being difficult to play with.