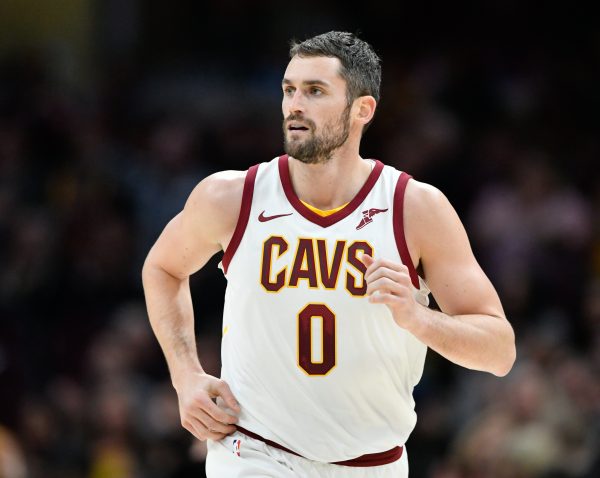 The Cleveland Cavaliers are still searching for answers following a near collapse in Thursday night’s win over the Orlando Magic. After the game, Cavaliers head coach Tyronn Lue reflected on how his team should try and overcome offensive lulls in the future.

Much of his solution revolves around keeping big man Kevin Love involved on the offensive side of the ball.

“I know Kevin is playing the 5 and sometimes he has 5s guarding him, but we still got to be able to get him touches and involve him in the game,” Lue said. “I thought tonight he was great defensively, but we didn’t use him as much as we should have. But he still played through the game, and I thought he was great. But even in those offensive lulls, we got to still post him against 5s and just see what he can do down there.”

Love finished Thursday night’s game with 12 points, 11 rebounds, and two assists, but the All-Star big man put up only four shot attempts in the second half. Love seemed to echo his coach’s sentiment about the importance of getting more high-percentage attempts in the paint, but added that another issue currently plaguing the Cavs is a lack of ball movement and team-oriented play.

“[Wednesday] we had a good practice and we moved the ball extremely well,” Love said. “Feel like when we do that we’re such a better team. There’s just times where we have lapses, where it’s either on one side of the floor or we’re not getting those paint touches, so I don’t think it’s just that. I think it’s all of us playing together, moving that ball and playing for one another.”

Thomas knows changes need to be made to ensure future success.

“Collectively, as a group, we’ve got to do a better job knowing that,” Thomas said. “Two or three times down, knowing we haven’t gotten a good shot, we need the ball moving, we need the ball to move side to side. Or we need to find the best shot possible. We can’t continue to just take one-pass shots, if that’s the case.

The Cavs managed to stop the bleeding with Thursday night’s win, but it’s clear that the problems that have been plaguing them as of late are nowhere near solved. Luckily, it seems the whole team is committed to finding answers and getting its season back on track.