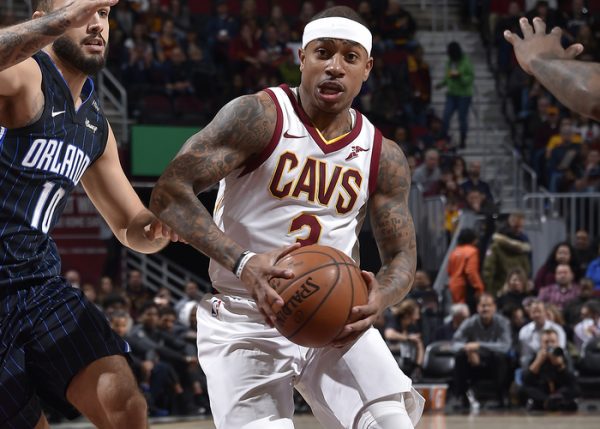 (Cleveland, OH) — Two free throws by Isaiah Thomas with 11.2 seconds left helped the Cleveland Cavaliers escape with a 104-103 victory over the Orlando Magic on Thursday night at Quicken Loans Arena. That helped avoid what would have been another disastrous collapse after the Cavaliers had led by 20 to start the second half and by as many as 23 late in quarter number two.

The Cavs led 67-47 at the half, then watched their shooting touch disappear for virtually the entire third quarter. Cleveland hit 4-of-18 (22 percent) from the field before a pair of field goals in the final minute gave it an 84-80 lead at the end of the period.

“We got stagnant on offense. I think when we get stagnant and we start playing one on one and the ball’s not moving, it makes it that much tougher to get baskets and to get stops on the defensive end,” Thomas said. “We can’t play around with the game and we did that in the third quarter.”

In contrast, Orlando was on fire during the bulk of that third quarter, hitting on 13-of-18 the field before missing their last three attempts. They had tied the game at 80 with 49.2 seconds left in the quarter on a pair of free throws.

“We want to play better, but we know we’re in Strugglesville,” LeBron James said. “We weren’t quick and sharp on the offensive end. We just came out lethargic in the third quarter.”

After the Cavs briefly built the lead back up to nine points early in the fourth, the Magic again chopped that deficit down, getting to within one at 100-99 with 3:30 left. Orlando then finally took its first and only lead of the game with just 31.5 seconds remaining at 103-102.

Following Thomas’ free throws, a layup attempt by Orlando missed, followed by a late whistle on a play out of bounds. That resulted in a jump ball at center court with 0.2 seconds remaining that left the Magic with no time to get off a shot.

Thomas paced the Cavaliers with 21 points and four assists, with James contributing 16 points, six assists and five rebounds. Kevin Love‘s double-double of 12 points and 11 rebounds were followed by Dwyane Wade‘s 11 points. Meanwhile, the duo of Jae Crowder and Jeff Green each chipped in with 10 points apiece.

“In the first half, we were moving the ball and shooting well,” Love said. “But in the second half, we didn’t get much in the paint.”

The Cavaliers welcomed back Derrick Rose after a 32-game absence. The guard played 13 minutes and scored nine points and also showed an aggressive move to the basket.

The Cavs had been in the midst of nine losses in their past 12 games, but the Magic entered the contest having dropped 27 of their last 32 games.

“Just being in a little funk, out of sorts,” James said of the team’s recent problems. “Obviously, we’ve been struggling lately, but we have to figure out how to put two halves together.”

The Cavaliers will next host the Oklahoma City Thunder in a rare Saturday afternoon game, the result of ABC broadcasting the game nationally. Tipoff will be just after 3:30 p.m. ET, with James on the threshold of yet another milestone in his storied career. The 15-year veteran needs just 25 points to reach 30,000 for his career.