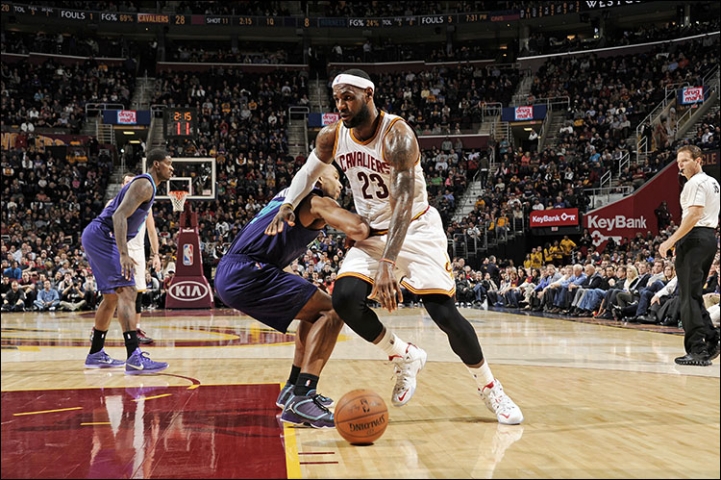 (Cleveland, OH) – Scoring the first 21 points of the game played a big part in helping the Cleveland Cavaliers hold off the determined comeback efforts of the Charlotte Hornets in a 97-88 win at Quicken Loans Arena on Monday night.

After a rousing start, the Hornets were still able to get to within three during the first half and two during the third quarter. However, on both occasions, Cleveland was able to blunt any further push.

Once again, the team’s “Big Three” of LeBron James, Kevin Love and Kyrie Irving led the way, combining for 65 points. James and Love each collected double-doubles: James had 27 points and 13 assists, while Love contributed 22 points and 18 rebounds.

That production by the team’s key players was noted by head coach David Blatt, who said, “When they’re engaged and performing the way they are, it lifts everyone up.”

Blatt also noted that the two days off was an asset since the grind of playing six games in nine days had caught up with the team at the end of last week.

“Having a chance to be at home and getting our batteries recharged helped us.”

The Cavs connected on 11 of their first 13 shots while Charlotte missed their opening 10 attempts and Cleveland took advantage of three turnovers for a 21-0 start. Al Jefferson’s jumper from the left side finally took the goose egg off the scoreboard for the Hornets with 5:34 left in the opening quarter.

That surge was primarily fueled by Love, who tossed in 10, including a pair of threes. James’ two free throws were the last points before Jefferson’s tally.

In postgame comments, James said, “I loved the way we start, but I didn’t love the second quarter.” However, he did have praise for the overall defense saying, “I think we’re all playing some good defense.”

Love added, “We took them away from what they wanted to do.” Commenting about the difference between giving up 119 on Friday night and 88 in this game, Love said, “We broke down the film, found out where we went wrong and cleaned it up.”

After Tristan Thompson’s dunk with 43 seconds remaining in the stanza made it 33-13 in favor of the Cavaliers, Charlotte scored four of the final five points to make it 34-17 after the first 12 minutes.

Much like the Cavs did at the start, the Hornets began the second quarter hot, notching nine of the first 11 points. That whittled the once-imposing deficit down to 10 at 36-26 with 9:55 remaining before intermission.

The Cleveland advantage would get as low as three after Kemba Walker’s jumper with 3:56 to go made it 43-40. Charlotte also had a chance to reduce the margin to one, but Lance Stephenson missed a pair of free throws.

Soon after those missed attempts, the lead was back up to 10 at 50-40, capped by a three from Dion Waiters with 2:26 to play before the break.

In between a pair of James baskets, Stephenson connected on a jumper for the Hornets, who then closed out the first half scoring on a three by Gary Neal with 44.5 seconds left to make it 54-45 at the break.

Following intermission, Charlotte scored the first two baskets, only to see Love answer with five, including his third three-pointer of the evening for a 59-49 lead with 10:14 left in the third.

What followed were runs on each side of the court, with the Hornets scoring eight straight to make it a 59-57 game. The Cavaliers responded with a 13-4 run of their own to make it 72-61 with 4:39 left.

With just under three minutes to play, Gerald Henderson’s alley oop got Charlotte within eight at 75-67, but they would be outscored 5-1 for the rest of the quarter to give the Cavs an 80-68 lead after three quarters.

During the opening moments of the fourth, both teams traded baskets until a pair of Anderson Varejao layups helped give Cleveland an 86-71 lead with 9:07 remaining in the contest.

After Waiters’ jumper with 5:17 to play made it 90-76, the Hornets reduced that to nine with under four minutes to go in the game. With a chance to possibly cut the margin to six just one minute later, Walker’s layup was blocked by James with 2:23 remaining. Waiters got the rebound and threw an outlet pass to a wide-open Love, who scored on a layup to boost the lead back up to double-digits.

In the final 1:09, James put a stop to any late drama by scoring twice. The latter basket was a three from the top of the key with 22.8 seconds left, with a meaningless basket by Charlotte putting a cap on the Cavalier win.

Irving agreed, saying about the Hornet comeback, “They gave us their best shot, and we withstood it.” He then added, “To grow further as a team, we have to communicate.”

The victory marks the first of five consecutive games at home for the Cavaliers. Next up is a Wednesday night clash at 7 pm ET when they take on the Atlanta Hawks. In their only other meeting back on November 15, Cleveland coasted to a 127-94 victory behind 32 points from James.