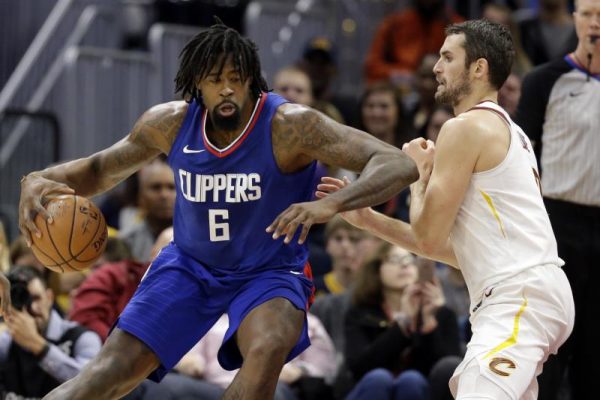 The speculation that the Cleveland Cavaliers might be interested in dealing for Los Angeles Clippers center DeAndre Jordan brought with it questions about exactly what the Cavaliers would have to relinquish to acquire Jordan. It appears that center Tristan Thompson would only be one part of a package deal.

Sam Amico of AmicoHoops.net reports that the Clippers are currently shopping Jordan, with the NBA’s trade deadline not arriving until February. Amico pointed out the key reasons for the Clippers’ willingness to deal the 6-foot-11 big man and what they could potentially be seeking:

“Jordan and the Clippers are struggling mightily, having suffered through nine straight losses before beating Atlanta on Wednesday,” Amico wrote. “They also lost injured starting point guard Patrick Beverly for the season. So word is, they want a big man and a guard in return for Jordan.”

That guard could conceivably be Iman Shumpert, who has been the subject of countless trade rumors over the past year. Amico also offered speculation about why the Cavaliers might be willing to dispatch Thompson to Los Angeles, where his girlfriend, Khloe Kardashian, and her family live.

“According to a league source, the Cavs still appreciate Thompson’s hard work on the offensive glass, but have begun to question his focus,” Amico wrote. “He compiled one point and zero rebounds in a loss to the New York Knicks in October.”

This season, Thompson has only averaged 4.4 points and 6.4 rebounds, both career-lows for the seventh-year center. While the 29-year-old Jordan’s numbers are also down this year, he’s still averaging 10.2 points and 13.8 rebounds. Plus, the Cavaliers got an up-close chance to see how well he could produce last Friday, when he scored 20 points and grabbed 22 rebounds in the Cavs’ overtime victory.