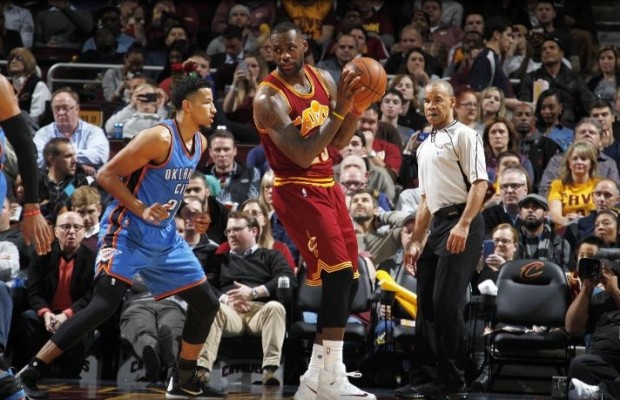 (Cleveland, OH) – Using a 23-4 run that began in the final two minutes of the third quarter, the injury-depleted Cleveland Cavaliers held on for their fourth straight victory by defeating the Oklahoma City Thunder, 104-100, at Quicken Loans Arena on Thursday night.

The Cavaliers, who improved their record to 17-7 on the year, trailed 78-70 with 1:42 left in the third and tallied the last two baskets of the quarter. Then, to start the final period, Kevin Love converted a rare four-point play that was part of nine unanswered points, which then led to a 10-4 run that gave the Cavs a 93-82 advantage.

Cleveland needed that cushion when the Thunder got the margin down to three with just under a minute left. Then, with the Cavs clinging to a 103-100 lead in the final 10 seconds, a pair of three-point attempts by Oklahoma City came up short and LeBron James added an insurance free throw with just 0.7 seconds remaining to clinch the contest.

James led all scorers on the night and collected a double-double in the process, scoring 33 and handing out 11 assists. He narrowly missed a triple-double by also contributing nine rebounds. He was joined in double-double category by Tristan Thompson with 14 points and 15 rebounds, and Matthew Dellavedova with 11 points and 10 assists.

Dellavedova was forced to play nearly 39 minutes due to more injury issues in the Cavaliers backcourt. A thumb sprain for Mo Williams kept him out of the lineup, which followed earlier news that Iman Shumpert’s groin injury would prevent him from playing. To start the day, Kyrie Irving had doused hopes that he’d make his long-awaited debut by saying that he was still not ready.

Three other Cleveland players also ended the evening by scoring in double figures, paced by Richard Jefferson with 13. However, Love’s 11 points included a clutch three from the right corner with 1:44 remaining to make it 103-95. That basket was only the second (and last) field goal the Cavaliers managed in the final 6:05 of the game.

In regards to threes, Cleveland nailed 12 of them, compared to six for the Thunder. However, Oklahoma City converted 24-of-28 free throw attempts, while the Cavaliers only reached the charity stripe 13 times, converting 10 attempts.

Early on, a standard first quarter saw the Thunder hold a two-point advantage, followed by a second quarter that was a series of runs for each team. The Thunder began with a 12-2 run over the first five minutes to lead 40-28, followed by 18 unanswered points by the Cavs over the next 4:30. The half concluded with Oklahoma City scoring the final seven points to again take the lead at 47-46.

Even with his on-court heroics, James found time to be involved in a fourth quarter play with 3:07 left that inadvertently involved a fan. James lunged to try and reach a ball going out of bounds and ended up tumbling over a woman in the front row near the Cleveland bench. That woman was golfer Jason Day’s wife, Ellie, who was carted off to check for injuries:

“I didn’t think it was serious at first, just another run-in with a fan sitting courtside,” said James. “It’s unfortunate it happened, but I heard she’s doing well.”

A less formidable challenge would appear on the docket next for the Cavaliers on Sunday as they host the Philadelphia 76ers, who are currently at 1-26 on the year. However, given the Cavs’ injury woes and a tendency to play down to the level of such teams, the game still remains far from a given. The two teams will tip off at Quicken Loans Arena just after 3:30 p.m. ET.