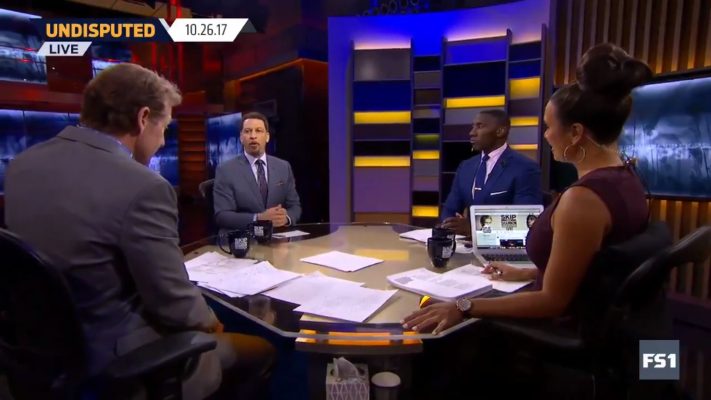 Now that the 2017-18 NBA season is in full swing, the rumors regarding LeBron James‘ upcoming free agency have taken a backseat to the on-court drama. However, that didn’t stop Fox Sports’ Chris Broussard from giving fans a little insight on Thursday when he joined FS1’s “Undisputed” to add fuel to the rumors stating that James is headed to the Los Angeles Lakers this summer.

"I was at the Lakers game last night, and the agents for Paul George and LeBron were there… just an observation." — @Chris_Broussard

“I’ll be in trouble! I’ll be in trouble,” Johnson said. “You know, we’re trying to build a championship team with the Lakers and hopefully next summer, we’ll be in line to sign free agents. That’s how you do it!”

Broussard gave context to the cryptic quote, proving that while Johnson wasn’t at liberty to discuss the Lakers’ intentions, that doesn’t necessarily mean they aren’t trying to lay the groundwork for a blockbuster offseason next summer.

“Well I was at the Lakers game last night and the agents for Paul George and LeBron were there,” he said. “Just an observation.”

Anything that comes out regarding James’ future is solely speculation until the 2018 offseason and free agency period actually begin, but that likely won’t keep the reporters and journalists from continuing the drama that is wrapped up in James’ uncertain future with the Cleveland Cavaliers.