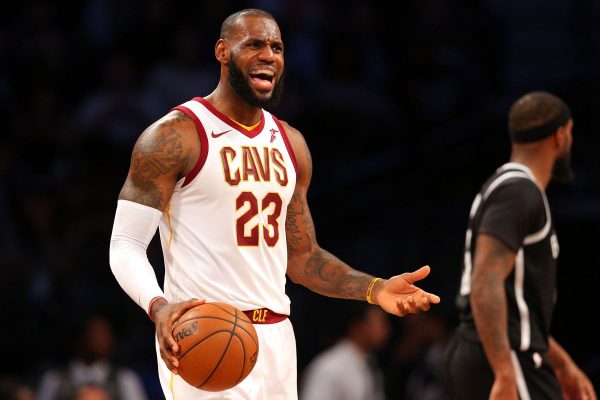 The Cleveland Cavaliers received a plethora of weapons from the Boston Celtics in return for Kyrie Irving over the summer. While Jae Crowder, Isaiah Thomas, Ante Zizic, and a 2020 second-round pick from the Miami Heat are all valuable assets, perhaps the most prized piece of the trade was the Brooklyn Nets’ unprotected 2018 first-round draft pick.

Before the season began, experts predicted that the Nets would be one of the worst teams in the NBA, meaning the pick would be highly valuable. Following the Cavs’ loss to the Nets on Wednesday, however, LeBron James has doubts about just how valuable that pick will actually be.

“It might not even be that good of a pick,” James said.

With the loss, the Cavs and Nets now share the same record at 3-2 on the young 2017-18 season. When asked if James is monitoring the Nets’ record to gauge the value of the pick, he said “I don’t look at it at all right now” because “it’s too early in the season.” He did admit, however, that as the season goes on, he might take a peek.

“When it gets closer I’ll probably look,” he said.

Head coach Tyronn Lue sarcastically jabbed at his own team following the loss, saying the Cavs’ 2018 pick might end up being more valuable than the Nets.’ Later, though, he offered a more serious tone, saying the Cavs already show a need to improve early in the season.

“I mean, four games out of 82 is not a lot, but it is four games that like you said you have your hands on them,” Lue said. “But, we gotta play better.”

The Cavs are still working to integrate their offseason additions and have already dealt with a number of injuries to key players, but James and company still expect to be the best team on the court on any given night. The season is young, and the contenders and bottom feeders have yet to truly separate themselves from the rest of the league. As the season continues, however, many of the Cleveland faithful will likely join James in checking on just how valuable that acquired first-round pick will be.

As for revenge, the Cavs will have to wait until Nov. 22 to face off against the Nets again, when Brooklyn travels to Cleveland to try and win two in a row against the defending Eastern Conference champs.