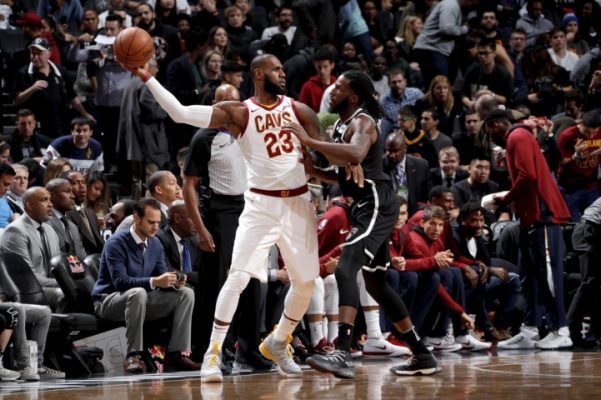 (Brooklyn, NY) — Despite a furious fourth-quarter comeback and a triple-double by LeBron James, the Cleveland Cavaliers suffered their second loss of the 2017-18 season with a 112-107 defeat at the hands of the Brooklyn Nets at Barclays Center on Wednesday night.

The Nets built up their five-point halftime lead into a double-digit margin over the course of the third quarter, leading by as many as 13 at 84-71 in the final minute of that period. With 8:48 left in the game, Brooklyn scored on a jumper to give them a 92-81 advantage, but Cleveland then ran off 10 unanswered points to make it a one-point contest just three minutes later. Kevin Love‘s 3-pointer with 5:15 left then briefly gave the Cavs the lead back, with the ill-fated comeback fueled by five missed shots from the field by the Nets, who also committed a pair of turnovers during that stretch.

Brooklyn managed to take the lead back at 97-96 with 3:46 remaining before four straight points were scored by Cleveland. The Nets then answered with an 11-4 run and had a chance to go up by four points late, but missed free throws allowed James to go to the foul line with 7.6 seconds left, with the Cavs trailing 109-107. Unfortunately, James missed the first attempt and his intentional miss on the second shot was rebounded by the Nets. Splitting a pair of free throws, Brooklyn then clinched the game when an attempted Cleveland inbounds pass went out of bounds and was ruled a jump ball that favored Brooklyn.

“A tough finish, but give them credit, they made a lot of plays,” Kyle Korver said.

Despite the comeback, Cavaliers head coach Tyronn Lue expressed his frustration at needing to put together one in the fourth quarter.

“Why can’t we get up in the first few quarters?” Lue asked. “Why do we need to have our backs against the wall before we get going?”

James ended the night with 29 points (10 in the final quarter), 13 assists, and 10 rebounds. Love picked up a double-double with 15 points and 12 rebounds, though the reserve duo of Korver and Jeff Green came off the bench to combine for 40 points. Korver notched 22, including five 3-pointers, while Green’s 18 were supplemented by six rebounds.

“A lot of our shots late were short because we expended so much energy coming back,” James said.

In the opening quarter, each team put together runs, though neither shot particularly well during those first 12 minutes. Unlike their past two games, the Cavaliers got off to a fast start, taking a 13-4 lead in just over five minutes of action. The Nets answered with a 12-2 run of their own and eventually ended the period with a 26-23 lead, with the Cavs holding a 16-8 advantage in the area of rebounds. The problem was that sloppy play resulted in seven turnovers for Cleveland.

Frequent lead changes were the story of the second quarter, with the Nets holding another three-point advantage at 55-52 when intermission arrived. Two notable baskets by the Cavaliers, who committed six more turnovers during the period, were on dunks from Green and James.

“We’re just taking too long to get into the flow of the game and teams are able to get a jump on us.” James said.

Lue spoke about how the Nets were able to hit 17 3-pointers on the night, continuing a problem that began in last Saturday’s loss to Orlando.

“When we don’t contest shots and get up on them, they’re going to hit those shots,” Lue said.

“I think the stats show that we’re not defending the three well,” Love said. “We have to be better than that.”

James reached one more milestone in his legendary career in this contest, playing in his 772nd game in a Cavaliers uniform, passing former teammate Zydrunas Ilgauskas. He reflected on what that team record means.

“I’m available every night for my team and I show up and put up numbers,” James said.

Both members of the Cavaliers’ starting backcourt just a week ago, Derrick Rose and Dwyane Wade, sat out the game because of ankle and knee injuries, respectively. The possibility exists that both will be back in uniform on Saturday night when the Cavs travel to face the New Orleans Pelicans, with tipoff set for just after 7 p.m. ET.