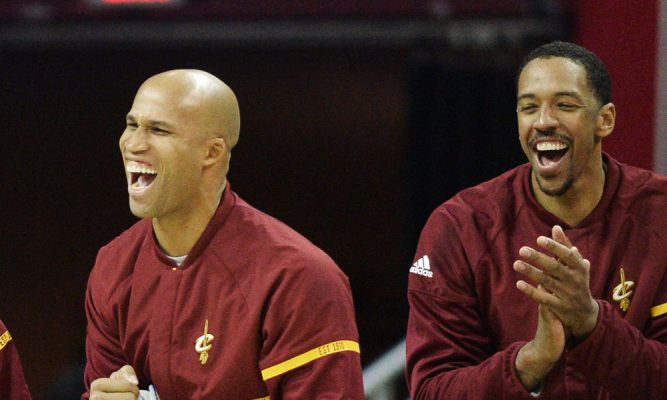 Richard Jefferson is no longer a member of the Cleveland Cavaliers, but his comedic spirit lives on.

On Saturday, Jefferson’s close friend and co-host of their Road Trippin’ podcast, Channing Frye, dedicated an Instagram post to his former teammate.

Everyone feels bad for @roadtrippin aka (@rjeff24 on snap) but really good riddance!! He was a horrible lockeroom guy he wasn’t doing what we needed from a pro anyways also his baldness was a serious distraction during game time we couldn’t hit any 3s.goodluck whatever happens you old fart! #loveyaman #youstilloweme50$ #best2yearsever #sarcasam

Jefferson was part of a trade that sent him, Kay Felder, two future second-round draft picks and cash considerations to the Atlanta Hawks in exchange for the draft rights to forward Dimitrios Agravanis and guard Sergey Gladyr. Jefferson was immediately waived by the Hawks, but ESPN’s Adrian Wojnarowski and Dave McMenamin reported that the 17-year pro and the Milwaukee Bucks have expressed mutual interest in each other once he clears waivers.

Perhaps Jefferson will find someone else to co-host a new podcast with, but Frye and Jefferson’s on-air chemistry will certainly be missed this season.