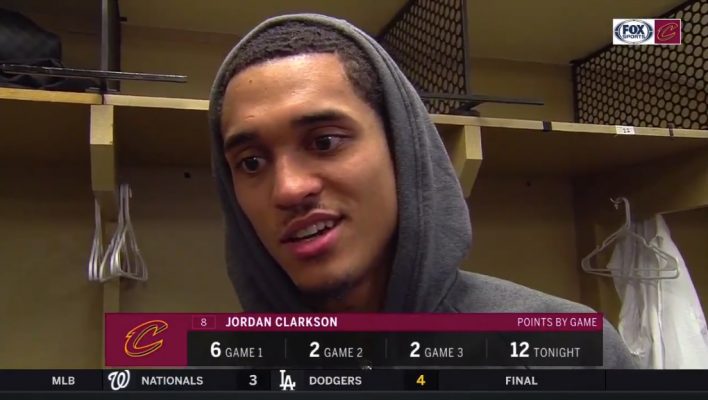 Coming off the bench for the Cleveland Cavaliers in Game 4 of their playoff series against the Indiana Pacers, guard Jordan Clarkson put together a strong second quarter by scoring 10 of his 12 points on the night. That effort helped the Cavaliers build their biggest lead of the game and take some of the offensive pressure off teammate LeBron James.

After the quarter ended and the two teams headed to their respective locker rooms, James briefly spoke with Clarkson. After the game, Clarkson was asked what James told him:

.@JordanClarksons reveals what @KingJames said to him as they walked off the court in the second quarter.#CavsPacers | #WhateverItTakes pic.twitter.com/dREZqhFm9W

Clarkson is taking part in the postseason for the first time in his NBA career after coming over from the Los Angeles Lakers along with Larry Nance Jr. in a February trade. Clarkson ended his night connecting on 5-of-9 from the field, grabbing two rebounds and handing out an assist. One indication of the importance of his contributions can be seen in looking at his performance in the first three games of the Cavaliers-Pacers series. In that trio of matchups, he scored a combined 10 points — the same amount he was able to pour in during a single quarter on Sunday night, with his 4-for-14 shooting from the field in those games also standing in contrast to his Sunday night effort.

The performance of Clarkson was especially vital considering veteran George Hill was forced to sit out the game due to back spasms, which depleted the team’s backcourt depth. Depending on Hill’s availability for Wednesday night’s Game 5 at Quicken Loans Arena, Clarkson might be called upon again to deliver a similar performance.