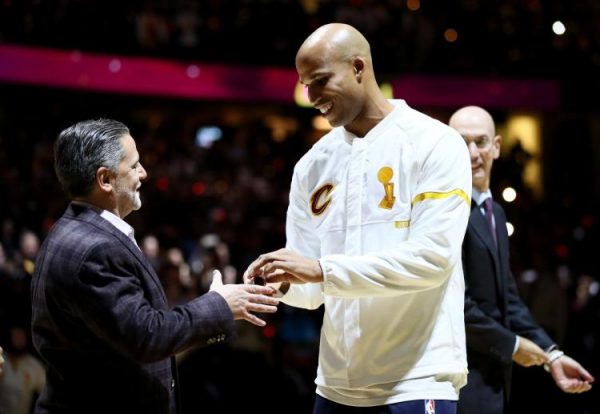 On Saturday, the Cleveland Cavaliers shipped Richard Jefferson, Kay Felder, two future second-round draft picks and cash considerations to the Atlanta Hawks in exchange for the draft rights to forward Dimitrios Agravanis and guard Sergey Gladyr. While Jefferson’s career with the Cavs has come to an end, it almost ended much earlier.

According to ESPN’s Dave McMenamin, Jefferson was almost traded away during the 2016 NBA offseason when the forward nonchalantly revealed the Cavs’ championship rings on social media before the team was ready to show them off.

“The fact that Jefferson made it as long as he did with Cleveland was improbable, anyway. First, he retired after that Game 7 win against the Warriors and had to be persuaded to come back,” McMenamin wrote. “Then he was nearly traded the summer after the championship because he revealed what the Cavs’ rings looked like on his Snapchat account before the team was ready to release them to the public. Then-GM David Griffin was so ticked that he was ready to ship him out of town, sources told ESPN, before eventually calming down and accepting Jefferson’s apology.”

Considering the rumors leading up to Saturday’s trade and Jefferson’s ability to joke about it on his podcast, it seemed like R.J. had already come to terms with his career in Cleveland coming to an end. Jefferson was a fan favorite and will certainly be missed this season, but at least his career with the Cavs didn’t end a year early because of a silly social media faux pas.