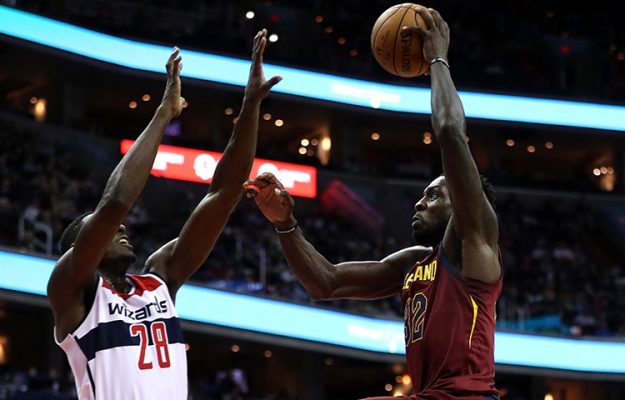 (Washington, DC) — Using what amounted to a skeleton crew for their game lineup, the Cleveland Cavaliers fell to 0-3 on the preseason as they dropped a 102-94 decision to the Washington Wizards at Verizon Center on Sunday afternoon.

Prior to the game, Cavaliers head coach Tyronn Lue made the decision to rest virtually every member of his first two units for either rest purposes or to continue rehabilitation of an injury. After some early leads in the opening quarter, the Cavaliers defense struggled to keep a rein on the Wizards, who closed out the first period with a 38-29 advantage.

Washington’s lead reached double digits and stood at 46-35 with just under eight minutes to go before halftime. At that point, the Cavaliers woke up to go on a 21-2 run that gave them a 56-48 lead, the last basket coming on a Kay Felder layup with 2:18 to go in the second quarter. The Wizards, who committed 10 turnovers during the period, would slice that deficit to a single point by the time intermission arrived, scoring the last seven points to make it 56-55 in favor of the Cavs.

One of those first half baskets came on an eye-opening dunk by Jeff Green who was asked at halftime if he had seen the rousing ovation he got from his teammates on the bench:

“Briefly, I had to get back on defense,” Green said. “But I saw most of them on the court, so I knew it was a good thing.”

Green led all scorers at halftime with 17 points and also grabbed six rebounds. He was asked at intermission what brought about the offensive outburst.

Once play resumed, the Wizards took back the lead and were never headed the rest of the way. By the time the third quarter ended, Washington held an 80-69 lead, with a dunk in the closing seconds putting the Cavs in a double-digit hole entering the last period. That margin slightly rose during the last 12 minutes before Cleveland was able to get it down to the final margin of eight points.

The Cavaliers return home for a preseason contest at Quicken Loans Arena on Tuesday night, when they host the Chicago Bulls in a game set to tip off just after 8 p.m. ET.