Don't Miss
Home / Editorials / Do the Cleveland Cavaliers Have Enough to Win an NBA Title This Season?

Do the Cleveland Cavaliers Have Enough to Win an NBA Title This Season? 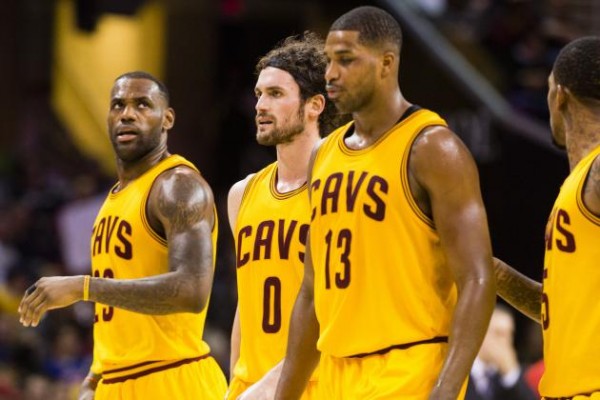 The addition of Channing Frye and the departures of Anderson Varejao and Jared Cunningham by the Cleveland Cavaliers offers the most recent window into how team general manager David Griffin is shaping a roster that can win the franchise’s first-ever NBA title.

However, the lingering question that remains is whether or not Cleveland has all of the necessary weapons to first get out of the Eastern Conference, with the Toronto Raptors just a few games behind them for the best record in the conference.

If and when that happens, they then still have to be able to take down a powerful Western Conference team such as defending champion Golden State or the Finals-tested veterans in San Antonio.

A New Addition on the Way?

The obvious math with regard to the Cavaliers’ current roster is that two players going out and only one coming back means that they aren’t done bolstering a group that’s built for a long playoff run. That additional roster spot will come once the team decides on a target following the flurry of contract-based releases of veteran players.

Last year, the Cavs picked up Kendrick Perkins, who had a championship pedigree and offered a physical presence in the paint. However, it became evident that Perkins’ best days were history and his presence on the team soon became a non-story.

Regardless of who that pickup is, looking at the current roster, the team’s fortunes continue to live and die on making sure that LeBron James is able to play. While there’s no current health concern related to him, the history from his absence last year shows that without him, even reaching the Finals is impossible.

One key positive difference for Cleveland this year, is that Kyrie Irving is showing no ill-effects from the fractured kneecap suffered in Game 1 of last year’s NBA Finals. His absence, on top of Kevin Love‘s, doomed the Cavaliers against the Warriors, the superhuman effort of James notwithstanding.

Even before that injury, Irving’s health was shaky all season. Therefore, having him salivating to make his mark this year can definitely be seen as a boost that can make a key difference.

Love also saw his time on the court end abruptly because of a shoulder injury. The fact that he’s currently averaging a double-double and head coach Tyronn Lue’s focus on making him a more effective player certainly help boost the potential production possibilities that didn’t exist last year.

When it comes to J.R. Smith, the Cavs may want him to shoot as much as possible, but the law of diminishing returns kicks in when he puts the ball up more than 12 times a game. At 12 or less attempts, the Cavaliers have a record of 30-7, but anything above that has resulted in an average 10-8 record.

His cohort at shooting guard, Iman Shumpert, still has defense as his main calling card, but his health is one to watch this season. His shoulder trouble from last year has flared up again, which could potentially require either more minutes from Smith or shifting veteran Mo Williams.

Williams’ mindset is undoubtedly unhappy after seeing his playing time cut severely since the return of Irving, but he’s still capable of lighting up the scoreboard, if necessary. As a starter, he has scored in double figures 13 times, including four games of 20 points or more.

The man who’s keeping Williams on the bench, Matthew Dellavedova, has shown solid improvement this year when it comes to three-point shooting. He’s returned after missing the last five games before the break, with the team appearing to struggle at times during that absence.

Timofey Mozgov has struggled all season and was supplanted in the starting lineup by Tristan Thompson almost immediately after Lue took over as head coach. Neither big man offers much in the way of scoring, but Mozgov has to at least exhibit some presence in the paint by grabbing rebounds, since when he gets at least as little as three in a game, it usually means a win for Cleveland.

Three veterans: James Jones, Richard Jefferson and Frye, along with newcomer Sasha Kaun, make up the remainder of the current roster. At this stage of his career, Jones is more effective off the court, but Jefferson still is effective as a three-point shooter, hitting at a 40 percent clip this season. If Frye can match his current numbers (just under 40 percent for three-pointers at 17 minutes per game), he and Jefferson will offer much more offense than anything Mike Miller and Shawn Marion provided last year.

That leaves Lue, who took over on January 22 after David Blatt was fired. There is precedent for a team winning a title after replacing their head coach during the season, most notably Pat Riley for the 1981-82 Los Angeles Lakers. How quickly Lue’s new offensive scheme of running more takes hold will likely be key to the Cavs’ hopes, since things haven’t always gone smoothly in the first four weeks.

Looking at the roster, the potential is there to win an NBA title, especially since it’s improved over an injury-depleted squad that went to Game 6 of the Finals last season. However, in some respects, the Cavaliers still need to get past a psychological barrier, especially after being destroyed by Golden State on January 18.

Their victory over San Antonio has the asterisk of the Spurs not playing Tim Duncan due to injury. The hope is that if those two teams meet in the Western Conference Finals, the effort expended to win it won’t be able to be sustained through a Finals that will hopefully see the Cavs as their opponent. That way, the Larry O’Brien Trophy will then be lifted by James & Co. in June.