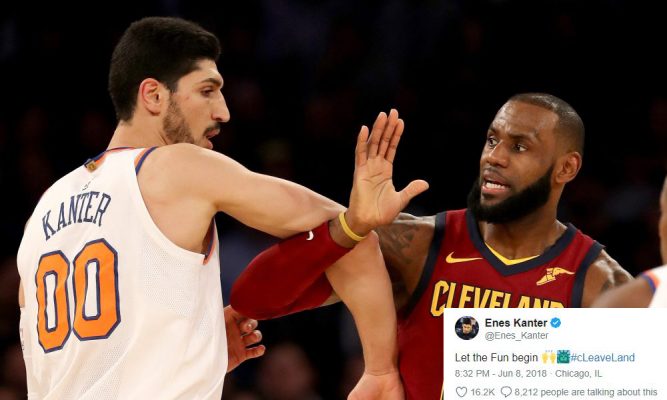 With the season of Cleveland Cavaliers forward LeBron James now having come to an end, his pending free agent status will now take center stage over the next few weeks. Already recruitment of him by players has begun, with one of the most unlikely sales pitches coming from New York Knicks center Enes Kanter.

The reason that James is likely to ignore Kanter’s attempt at recruiting him is twofold. The first reason is that James just completed his 15th season in the NBA and is looking for a team that can challenge for an NBA title. That’s something that the Knicks aren’t anywhere close to accomplishing.

Perhaps an even stronger reason for dimissing the attempt is that James and Kanter have frequently been at odds over the past few years. In one instance, their on-court jawing nearly led to a fight. In addition, Kanter has occasionally taken to social media to take a jab at James over any number of different things.

When James became an unrestricted free agent for the first time in 2010, the Knicks were seen as strong contenders. That stemmed from James’ outspoken reverence for playing in Madison Square Garden and the marketing power of playing in New York City. In the end, he signed with the Miami Heat before returning to the Cavaliers in 2014.