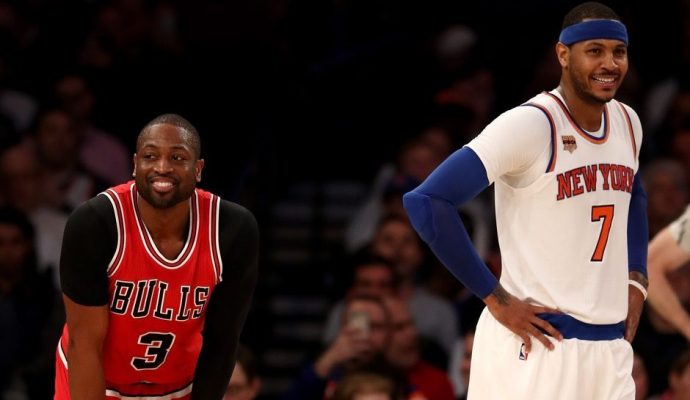 While the Kyrie Irving trade remains on hold for the time being, the Cleveland Cavaliers are not letting the uncertainty distract them from their other offseason goals.

Throughout the offseason, Carmelo Anthony and Dwyane Wade have both been rumored to be targets for the Cavs as they continue to try and build talent around LeBron James for another shot at an NBA title. At the moment, the Cavaliers are mostly focused on dealing Irving, but according to Sam Amico of AmicoHoops.net, Wade and Anthony are still very much on the Cavs’ radar:

“Along with trading Irving, and potentially dealing Shumpert, the Cavs continue to keep an eye on the Carmelo Anthony situation in New York, and more so, the possible Dwyane Wade contract buyout in Chicago.”

While Anthony was previously believed to no longer be interested in waving his no-trade clause to join the Cavs, the addition of Isaiah Thomas and Jae Crowder could change all of that.

As for Wade, it may only be a matter of time until the 12-time All-Star is granted a contract buyout from the Chicago Bulls. Recent reports have stated that he could sign with the Cavs to try and win another championship with James.

The Cavs clearly have a lot on their plate at the moment, but if they are able to bring the likes of either Anthony or Wade to Cleveland, it will all be worth it.