Video: LeBron James Says He ‘Has No Ceiling’ in Recent Pickup Game at UCLA 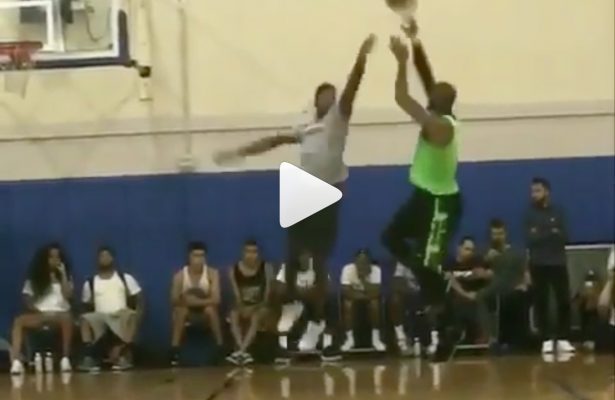 Cleveland Cavaliers superstar forward LeBron James posted two videos to his Instagram account on Wednesday, which featured himself participating in a basketball scrimmage at a gym on the campus of UCLA.

“My love for this game is insane and drives me crazy,” James said in one of his video captions. “Nothing to me is better than the process of feeling uncomfortable as you try and push to improve on your skill/talent. I have no ceiling and I refuse to fall into the trap of complacency!”

My love for this game is insane and drive me crazy! Which I LOVE!! Nothing to me is better than the process of feeling uncomfortable as u try and push to improve on your skill/talent. I have no ceiling and I refuse to fall into the trap of complacency! #striveforgreatness? #SavageMode?

In his second video from Wednesday, James is seen throwing down an emphatic two-handed slam dunk after receiving a pass from UCLA alumnus and current Indiana Pacers point guard Darren Collison.

At the beginning of the video, Cavs head coach Tyronn Lue also appears to be observing his star player while sitting at the court’s baseline.

Based on these two videos alone, James appears to have all of the motivation in the world when it comes to preparing for the upcoming 2017-18 season. Cavs fans should be excited, as the regular season opener against Irving and the Celtics is already less than two months away.