Cavs Rumors: LeBron James and Kyrie Irving Got Together in Miami 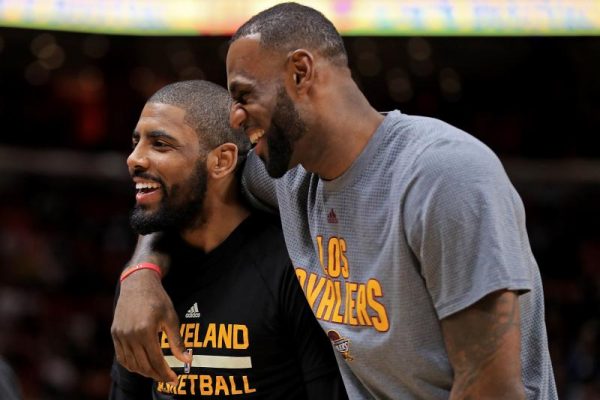 The disintegration in the relationship between Cleveland Cavaliers stars LeBron James and Kyrie Irving has been reportedly related to Irving’s trade request last month. However, a new report indicates that the two players recently got together in Miami, offering Cavaliers fans hope that the two can somehow patch things up and remain teammates.

“From very reliable sources. Plural. Kyrie and LeBron were in the same room over the weekend in Florida…Apparently these guys were in the same room and here’s the deal,” Rizzo said. “I don’t know if there’s a thawing out process. All I do know is LeBron didn’t punch Kyrie the way Stephen A. thought he would. I can report that. As for what they talked about or discussed…it was very cool. They didn’t get into any heated discussions.”

The “Stephen A.” reference was noting the recent comment by ESPN pundit Stephen A. Smith, who suggested that James was reportedly very upset about Irving’s criticism and the reasons for his trade request.

Of course, two people being in the same room is a basic description that can have any meanings and doesn’t guarantee that any issues that came to the surface in the aftermath of Irving’s request have been smoothed over. However, Rizzo and Cavaliers owner Dan Gilbert have a friendship that’s previously included Rizzo traveling with Gilbert to the 2013 NBA Draft Lottery.

Miami is where James spent four seasons away from the Cavaliers between 2010 and 2014. In addition, the Miami Heat are one of the four teams that Irving has indicated a preference in being traded to, though his current contract gives him no power in determining where he could be dealt.