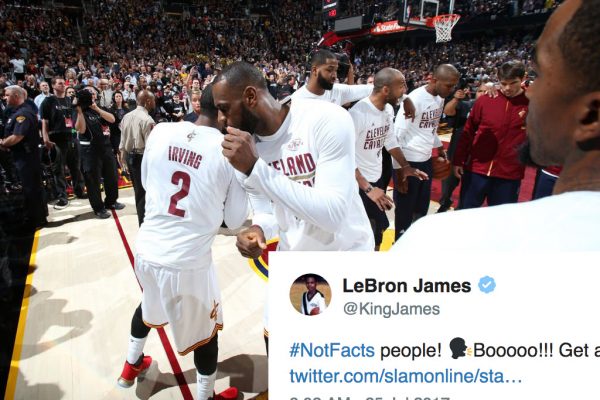 Drama continues to envelop the Cleveland Cavaliers as Kyrie Irving‘s trade request has developed into rumors and reports of a bitter feud between Irving and LeBron James.

Both stars have stayed fairly quiet throughout, but on Tuesday morning James decided enough was enough and took to Twitter to call out Slam Magazine for spreading false reports.

With finger-pointing allegedly taking place on both sides behind the scenes, it’s refreshing to see James directly address one of the many rumors that have been reported in the last few days.

This doesn’t mean a resolution between Irving and James will take place any time soon, but hopefully it can help the unfortunate situation return to back to a level of professionalism.

cleveland cavaliersfeaturedkyrie irvinglebron jamesnews ticker
← Previous Story Report: Kyrie Irving Has No Intention of Trying to Work It Out With LeBron James
Next Story → Report: LeBron Committed to Cavs, Hopeful to Remain in Cleveland for Rest of Career