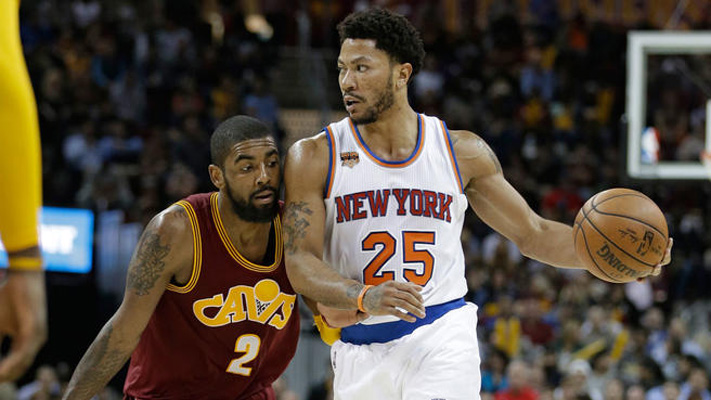 With Kyrie Irving presumably headed for another team after his trade request, the Cleveland Cavaliers‘ pursuit of free agent guard Derrick Rose continues to move forward, with Rose expected to meet with the team’s management on Monday. Indications are that Rose would prefer to sign with the Cavaliers and, if signed, would agree to a one-year contract for the $2.1 million minimum.

ESPN’s Adrian Wojnarowski reported the news and also indicated that the pursuit of Rose came shortly after Irving’s July 7 trade request was made to team owner Dan Gilbert.

“Rose met with the Los Angeles Lakers on Friday, but has been leaning toward the Cavaliers opportunity, league sources told ESPN. Rose’s visit comes amid Kyrie Irving’s trade request, which the organization has been aware since starting discussions with Rose recently.”

Rose played last year with the New York Knicks, averaging 18.0 points a game, after being dealt from the Chicago Bulls. During his previous years with the Bulls, Rose was named league MVP in 2011 before then watching his career endure a devastating knee injury the following year.

Since that time, he’s struggled to regain that high level of production before the injury. He’s coming off a season-ending knee surgery that caused him to miss the final five games of the Knicks’ 2016-17 season.

Wojnarowski also offered a clear reason why Rose would be willing to play a such a severe discount with the Cavaliers:

“Rose has been largely interested in finding a contender to help revitalize his market value,” Wojarowski reported.

Depending on who the Cavs get in return for Irving, Rose’s role could be at either of the guard slots.