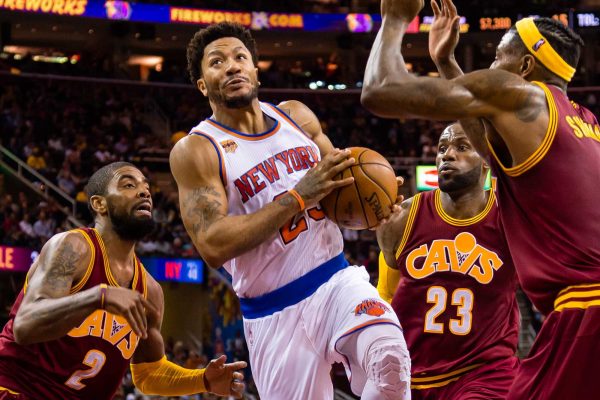 Following news that broke earlier on Thursday about the Cleveland Cavaliers possibly signing free agent guard Derrick Rose to a contract for the 2017-18 season, a new report indicates exactly how much the Cavaliers will be offering the often injury-plagued guard.

Brian Windhorst and Adrian Wojnarowski of ESPN indicated that Cavs’ offer will be for a minimum NBA salary of $2.1 million for the upcoming campaign. With the Cavs only being able to offer a portion of the taxpayer mid-level exception or the veteran’s minimum, the maximum amount the Cavs could pay Rose is $2.5 million over one year. A $2.1 million contract would boost the team’s luxury tax by $6.4 million to a total of $78.2 million.

“Playing on a contender is important to Rose. If he agrees to a deal in Cleveland, it would also allow him to be close to family in Chicago,” Windhorst and Wojnarowski reported.

Cleveland does have competition for Rose’s services, with the Milwaukee Bucks and both Los Angeles teams being in the running. In the latter case, ESPN’s Chris Haynes has noted that the meeting between Rose and the Los Angeles Lakers earlier on Thursday lasted three hours.

One of the reported selling points for the Lakers is their ability to offer more money and playing time than he’d receive from the Cavaliers. However, as opposed to the Cavaliers still being a favorite to reach their fourth consecutive NBA Finals next June, the Lakers’ chances of even reaching the postseason remains questionable