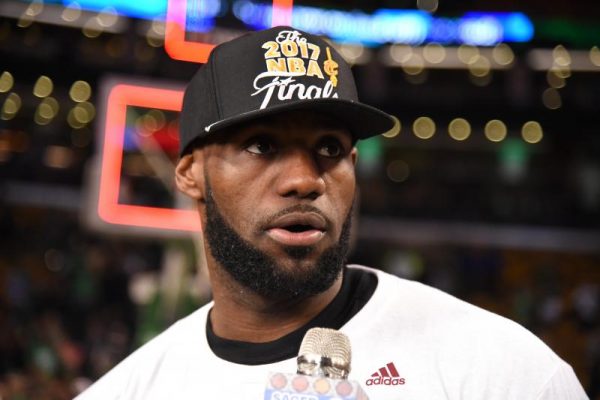 As Cleveland Cavaliers forward LeBron James gets set to close out his 14th NBA season by playing in his seventh consecutive NBA Finals, the future Hall of Famer is looking to stay close to the game of basketball once his legendary playing career comes to an end. At that point, according to James, owning an NBA franchise will become his focus, something that he seems intent on accomplishing.

James spoke to Ken Berger about his goal, along with how he’ll approach the task of running that team:

“I will own a team someday,” James told Berger. “That’s my next thing. Why do I want to own team? I think it’ll be cool. I’ll stay part of the game and still be able to put people in positions of power. I’ve always loved that, putting people in a position of power to feel like they can make a change and make things happen.”

That business strategy is so that he’ll be able to continue building his financial interests with longtime friends and business partners Maverick Carter and Randy Mims, along with his current agent, Rich Paul.

A good portion of that focus will be the further development of his media company, SpringHill Entertainment, which is currently being run by Carter.

That appears to already be a big success, with a story in ESPN the Magazine by Pablo Torres offering this evidence:

“More than a dozen sources directly familiar with SpringHill, including rival producers, filmmakers and media executives, declare LeBron James, without debate, the most powerful athlete in entertainment today,” Torres wrote.

This isn’t the first time that James has spoken of eventually becoming an NBA owner, having offered more of an explanation last August during an appearance on the “Open Run” podcast that’s part of his UNINTERRUPTED media network.

“I feel like my brain as far as the game of basketball is unique and I would love to continue to give my knowledge to the game,” James said. “I would love to be a part of a franchise, if not at the top. My dream is to actually own a team and I don’t need to have fully hands on. If I’m fortunate enough to own a team, then I’m going to hire the best GM and president that I can.

“But I have a feel like I have a good eye for not only talent, because we all see a lot of talent, but the things that make the talent, the chemistry, what type of guy he is, his work ethic, his passion, the basketball IQ side of things, because talent only goes so far.”

Until that time comes, James’ main focus will remain on the court, with Game 1 of the NBA Finals the only thing currently in his line of vision. That contest will tip off just after 9 p.m. on Thursday night.