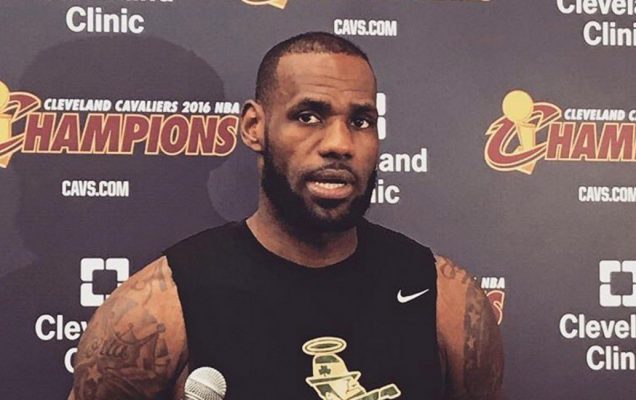 Cleveland Cavaliers forward LeBron James has been in the NBA for 14 seasons and has learned a thing or two about the use of psychology against an opponent. As he and his teammates get set to face the Boston Celtics in Game 1 of the Eastern Conference Finals on Wednesday night, James decided to do a little trolling ahead of time.

While speaking with the media following Tuesday’s practice, James was sporting a shirt that displayed the Fighting Irish logo from his high school, St. Vincent-St. Mary High School. Considering the Cavs are going up against the Celtics, who have a similar mascot as their logo, James seemed to have worn this shirt to foreshadow his next victim.

everything LeBron does is calculated, including his choice of shirt ahead of the ECF against the Celtics pic.twitter.com/SmrgGSjhCM

Facing the Celtics during the postseason is nothing new for James, this series marking the fourth time he’s battled them in a Cavaliers uniform and sixth time overall. In the first two instances, his Cavs teams came up short, with the final game of his first tenure with the team in 2010 taking place in Boston. Two years ago, the Cavaliers swept the Celtics in the first round.