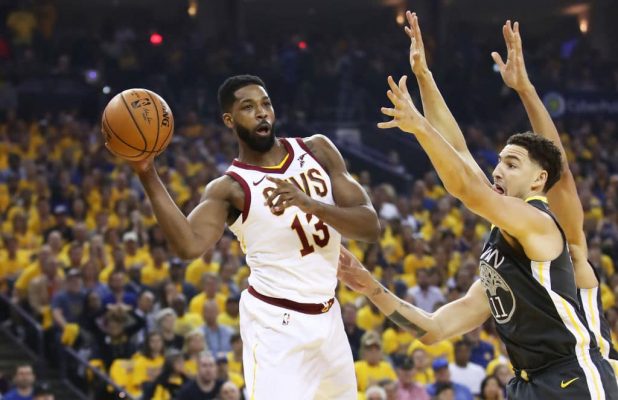 In the days leading up to the Golden State Warriors’ 129-105 win over the Cleveland Cavaliers on Wednesday night, Warriors guard Klay Thompson unleashed some bitter criticism toward the Cavaliers, related to actions made by players on the team in 2016.

On Tuesday, Cavs center Tristan Thompson addressed the veteran’s comments during an interview, not really taking offense by the comments, while putting them in the proper perspective.

Klay Thompson had expressed anger toward the Cavaliers because of their mocking of the Warriors blowing a 3-1 lead in the 2016 NBA Finals, referring to the team as a whole as “idiots” and pointing out the Cavaliers’ 1-8 Finals record the past two seasons.

That implosion by Golden State marked the first time in NBA history that a team had managed to squander away a lead of that type in Finals history, with the ridicule by Cavs players most prominently featured during a Halloween party that October. In that instance, cookies in the shape of tombstones which noted the 3-1 lead were prominently featured and then displayed in subsequent media reports.

Tristan Thompson noted that the guard’s comments were directed at a Cavaliers team that no longer serves as an arch-rival to the Warriors. That high-voltage rivalry was built upon the teams facing each other in four consecutive Finals, a first in NBA history. However, the departure of Cavaliers forward LeBron James in July effectively ended any hopes of a fifth straight meeting in the Finals, with the Cavs now in a major rebuilding mode while the Warriors remain the odds-on favorite to win their fourth title in the past five seasons.

Following Wednesday’s loss, the Cavaliers dropped to 5-19 on the year and are currently six games out of the eighth and final spot for a playoff berth. With rebuilding possibly including additional trades in the next two months, the reality is that the Cavs will likely not come close to reaching the postseason. In contrast, the Warriors are now 17-9 and currently stand just one game out of the top record in the Western Conference, with the three teams ahead of them lacking the postseason background possessed by the two-time defending champions.

In each of the previous three seasons, the Cavaliers and Warriors have faced each other on Christmas Day. However, the steep decline of the Cavs means that their final meeting against their old foes is no longer considered an elite contest. As a result, that game will take place on Golden State’s home court at Oracle Arena in April.