Video: DeMar DeRozan Offers $100 to Anyone That Can Stop LeBron James 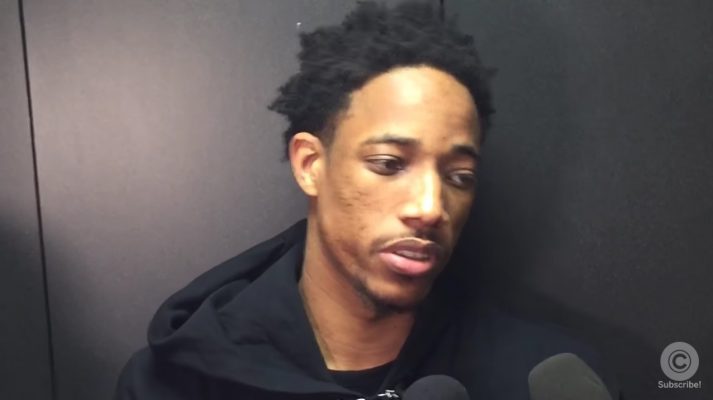 The dominance of Cleveland Cavaliers forward LeBron James over the first two games of his Eastern Conference semifinals series with the Toronto Raptors has reached a point that the Raptors’ DeMar DeRozan is halfheartedly offering money to anyone that can stop him. DeRozan made his remarks following the Cavaliers’ 125-103 rout of the Raptors in Game 2 on Wednesday night.

“LeBron’s going to be LeBron. We’ve got to key in on other players,” DeRozan said. “We can’t let Channing Frye go out and get 20 points. We can’t let guys like that get going. If you can find someone that can stop LeBron, I’ll give you $100. It’s on us to be able to take out all the other key players and not let them get going.”

James finished Game 2 with 39 points and is averaging 34.2 points per game in this year’s six postseason victories for Cleveland. In the two convincing wins over Toronto, James is averaging 37.0 points.

DeRozan’s frustration stemmed from his miserable night, where he scored just five points after having averaged 27.3 during the regular season. Four of those points came during the final quarter, when the Cavs had the game comfortably in hand.

The two teams will spend the weekend in Toronto for Games 3 and 4 on Friday night and Sunday afternoon, respectively.