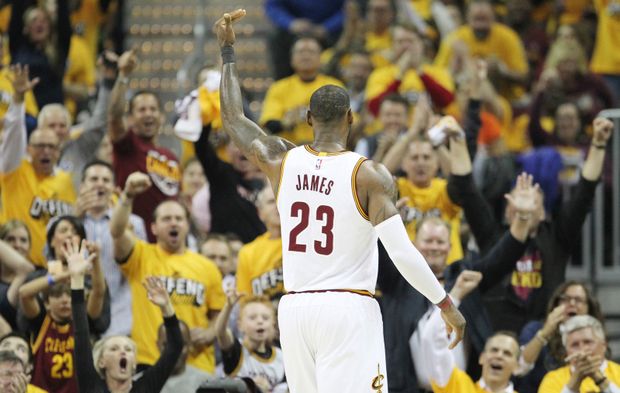 (Cleveland, OH) – Behind 39 points from LeBron James and a double-double from Kyrie Irving, the Cleveland Cavaliers remained perfect in the postseason by easily knocking off the Toronto Raptors, 125-103, in Game 2 of the NBA Eastern Conference semifinals at Quicken Loans Arena on Wednesday night.

James had a relatively quiet first quarter before his scoring surge began, helping push the team’s aggressive mindset throughout the contest. That allowed him to get to the foul line for 21 attempts, where he connected 15 times. He also added six rebounds and four assists to his busy night. During the third quarter, James once again reached another playoff milestone by passing Kareem Abdul-Jabbar for second all-time in postseason scoring. He now stands just 210 points behind the all-time leader, Michael Jordan, who finished his career with 5,987 playoff points.

“I’ve been very blessed and just took advantage of the opportunity,” James said about passing Abdul-Jabbar. “When you hear a name like Kareem, it’s pretty cool.”

Irving was one of the few Cavs to struggle from the field, hitting just 6-of-19 for the night, but did finish with 22 points on the evening. For the second straight game, he reached double figures in assists, dishing out 11 on the night.

“We were just playing the game right, we were making the ball swing,” Irving said. “When we’re playing at a high pace and high energy, the ball just seems to hop.”

Channing Frye and Iman Shumpert were the only other Cleveland players to reach double figures, scoring 16 and 11, respectively, with each collecting five rebounds. Frye led the team with five 3-pointers, part of 18 triples that were notched by the team. The Cavs as a team also handed out 28 assists and shot 55 percent from the field.

“For 48 minutes, we executed the game plan as well as possible,” James said. “I’m just playing in my comfort zone and I know what they want to take away. I was just lucky I had teammates that were able to feed me the ball.”

The Cavaliers were especially deadly from three-point land in the first half, connecting on their first eight shots from long-range and closing the two periods out by hitting 10-of-15. During the first quarter, their offense was on fire, hitting 71 percent from the field and taking a 34-22 lead. While the Cavs cooled off somewhat during the second period, they were still shooting field goals at a 58 percent clip for the half and, more importantly, left the court holding a 62-48 lead.

It was during the third quarter that the Cavaliers were able to put the game away, building their lead throughout the period before ending it with a 99-73 advantage. During the final four minutes of the period, the Cavs defense held the Raptors to a single point.

“The players did a good job of taking what the defense gave them,” Cavs head coach Tyronn Lue said. “Defensively, we played okay. On offense, we could have done better, we were a little sloppy with the basketball.”

From an individual standpoint on defense, the Cavaliers completely shut down DeMar DeRozan, limiting a player who had averaged 27 points per game during the regular season to a single point through three quarters. DeRozan finished his night with a mere five points on 2-of-11 shooting from the field.

“We know he’s a great player and we don’t want to get him in a rhythm or a in a groove,” Lue said. “We made sure our bigs were doing the right rotations.”

The scene now shifts to Toronto for Friday night’s Game 3 at Air Canada Centre. Tipoff will be just after 7 p.m. ET, with Game 4 following on Sunday afternoon beginning just after 3:30 p.m. ET. Last year, the Cavaliers played the Raptors in the Eastern Conference Finals and led 2-0 before heading to Toronto, but lost both games there before winning in six games.

“I addressed that in the locker room,” Lue said. “We can’t take this team lightly. We have to treat this like a business trip.”