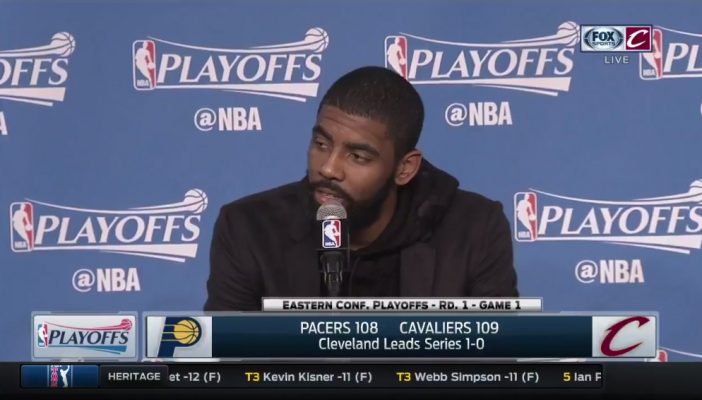 Saturday afternoon’s dramatic ending to Game 1 of the Cleveland Cavaliers‘ first-round playoff series against the Indiana Pacers likely has critics of the Cavs questioning their vulnerability. One person not concerned at all about that possibility is Cavaliers point guard Kyrie Irving, who offered a blunt response when asked by a reporter about the team being in that position:

“Do we feel vulnerable? Hell, no,” Irving said. “I know we made mistakes today, but we just need to come out with greater intensity for Game 2 and limit those mistakes. We’ll be in good shape.”

That alleged vulnerability, according to Irving, doesn’t mean that Cleveland is taking Indiana or any other playoff team lightly:

“It’s a long journey, we understand that,” Irving said. “So we don’t take one win or anyone for granted, we don’t take any possession for granted. Tonight was just a lot of mistakes on our end, a lot of 50-50 basketballs that should have been in our hands, a few rebounds kicked out of bounds.”

Irving ended the game with 23 points and six assists, while also delivering a pair of key defensive stops in the final minutes.

“It was really big for our team. Just momentum and understanding just how big of a stop it was for that moment, try and take full advantage of it,” said Irving. I wish I could have converted on a layup down the middle that would have given us more of a cushion.”

Game 2 will take place on Monday night at Quicken Loans Arena, with tipoff set for just after 7 p.m. ET.