Cleveland Cavaliers vs. Indiana Pacers Game 1 Recap: Down to the Wire 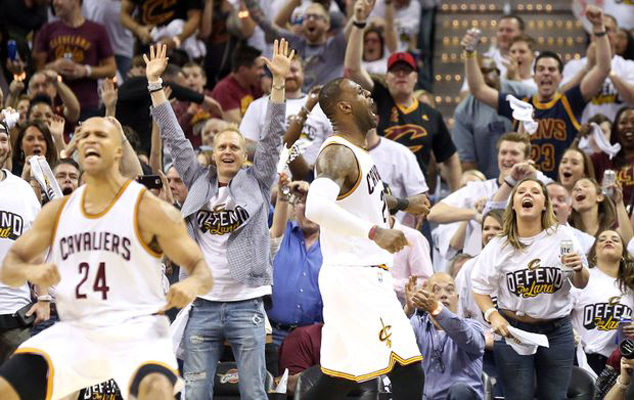 (Cleveland, OH) – In a game that literally went down to the final shot, the Cleveland Cavaliers opened up the postseason by avoiding an upset with a 109-108 victory over the Indiana Pacers in Game 1 of the Eastern Conference quarterfinals on Saturday afternoon at Quicken Loans Arena.

The Pacers’ C.J. Miles put up jumper in the closing seconds that would have likely given his a team a dramatic victory, but it missed and put the Cavaliers up 1-0 in the series. Just a few minutes earlier, Indiana had run off 11 unanswered points to turn a 103-94 Cleveland lead into a Pacers two-point advantage with 3:31 left.

The Cavs answered with six straight points of their own, but missed a chance to reduce the dramatics by splitting four free throws. That allowed the Pacers’ Paul George to drill a 3-pointer with 40.5 seconds left to get it within one, and a LeBron James missed three-point attempt with 20 seconds to go helped set up the final drama.

“We saw their sets and had a pretty good idea of what they were going to run,” Kevin Love said. “We forced C.J. into a tough shot and he left it a little short, but we’re thankful we escaped by one point.”

Kyrie Irving had two key stops in those final minutes that allowed the Cavaliers to score their six points in a row.

“Those were really big for our team as far as momentum,” Irving said. “It was just a possession-by-possession game. To gets stops like that were huge.”

James led all scorers with 32 points and collected a double-double by adding 13 assists, while also contributing six rebounds. Kyrie Irving tossed in 23 points and handed out six assists, while Love added 17 and Channing Frye 11. On the glass, Tristan Thompson brought down 13 boards.

“We had a chance to put that game away,” Cleveland head coach Tyronn Lue said. “To win that game, we needed defense. It was good to see us get stops down the stretch. The team did a good job of following the game plan. “

A total of 13 misses at the free throw line nearly cost the Cavaliers the game, connecting on just 14-of-27 from the field. Indicative of just how bad they were in this area was the fact that they shot better from the field (54 percent) than from the line (52 percent).

“It doesn’t matter how you get a win in the playoffs, we’re up 1-0,” James said immediately after the game. “We’ll look at the film and see how we can get better.”

Defense wasn’t a priority for either team during the first half, with the Cavaliers heading to intermission holding a 66-59 advantage. With 6:30 left in the half, the Cavs were hitting at a 70 percent clip by connecting on 21-of-30 from the field. They cooled off afterwards, yet still finished the half at a 61 percent success rate.

The reason they weren’t able to pull away from the Pacers was because their opponents were also hitting at a healthy rate. Indiana also cooled off in the last portion of the second quarter, yet finished the half with 50 percent shooting from the field.

“In a series, I think you get better with time,” James said. “I was happy with the emotion and energy we had. We’ll be more prepared for Game 2.”

Indiana continually sought to make inroads after the break, but by the end of the third quarter, the Cavs had managed to add a point to their lead, holding a 92-84 advantage with 12 minutes left. James played a key role in this period, contributing 12 of the team’s 26 points.

“I thought overall, we were pretty good on defense,” Lue said. “Outside of the loose balls they got, putbacks, 50-50 balls we didn’t get to and they scored on. Just clean those things up and it would have been a different game. You know, 11 turnovers for 19 points and missing 13 free throws wasn’t good for us, but we found a way to pull the game out and we’ll be better.”

Both teams will have Sunday off before resuming play at Quicken Loans Arena on Monday night. Game 2 will get underway just after 7 p.m., with the next two contests set for Indiana on Thursday night and next Sunday afternoon.

“Do we feel vulnerable? Hell, no,” Irving said. “I know we made mistakes today, but we just need to come out with greater intensity for Game 2 and limit those mistakes, we’ll be in good shape.”