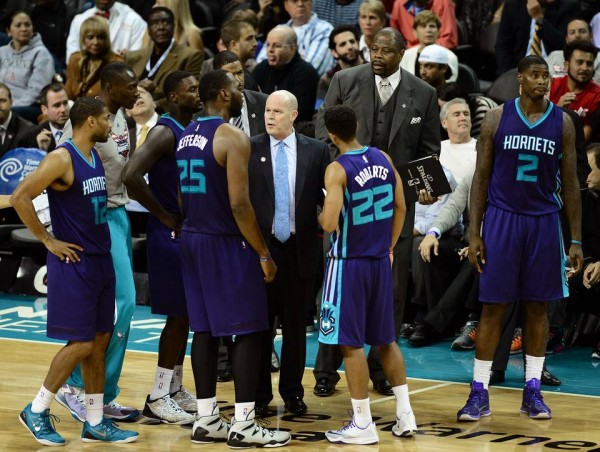 (Cleveland, OH) — The Cleveland Cavaliers (23-20) square off against the Charlotte Hornets (18-25) Friday night at Quicken Loans Arena. This game represents a matchup of two Eastern Conference clubs on the rise. The Cavaliers are in the middle of a four-game win streak, while the Hornets have won eight of their last ten games.

The Cavs are fresh off a convincing win over the Utah Jazz that showcased some of the passing and defense that fans have been thirsting for. It was a balanced effort all around as all five starters recorded at least 15 points for a second game in a row.

New addition Timofey Mozgov has certainly made his presence felt on the defensive end, as the Cavs have held their last two opponents to an average shooting percentage of 39.6%.

Though Mozgov has provided an immediate and noticeable change in the middle of the Cavs defense, credit must also be given to Head Coach David Blatt who made a change to the team’s defensive philosophy that has paid dividends in a small sample size.

Blatt initially wanted his bigs to defend opposing pick-and-rolls by hedging hard to the to cut off the opposing point guard. This requires the defense to respond quickly and be in sync with one another, a task this Cavaliers team was clearly not suited to perform.

Since the recent game against the Los Angeles Clippers, the Cavs bigs have been “icing” pick-and-rolls, which means sitting back to prevent the point guard from collapsing the defense. It’s a more conservative defense that doesn’t ask the big to cover as much ground, and the Cavaliers defense has improved as a result. Whether this recent improvement is a sign of positive long term growth still remains to be seen.

As for the Hornets, the team has rebounded from their atrocious start behind a stifling defense. To put it in perspective, Charlotte has not surrendered 100 points since December 31st. The Hornets will need to continue their defensive dominance if they hope to have a chance against the Cavaliers on Friday night.

With the injury to Al Jefferson, the Hornets have given up any semblance of floor balance, and are trotting out lineups featuring Michael Kidd-Gilchrist, Cody Zeller, and Bismack Biyombo. That’s a lot of length and athleticism to contend with in the paint. If the Cavaliers can maintain the balanced inside-outside scoring attack that’s helped propel them along their current win streak, then the game should be decided early.

2. Keep Kemba On the Perimeter When you look at the current Hornets roster, there’s not a lot of offensive firepower that jumps off the page outside of point guard Kemba Walker. As the sole (trustworthy) ball-handler on the team, the Charlotte offense rises and falls with Kemba. If Kyrie Irving can make Kemba work, and prevent him from collapsing the Cavalier defense, there’s not enough weapons left on the Charlotte roster to keep up with the Cavalier offensive attack. The Hornets are not a team the Cavaliers can allow to get set on defense. They’re a tenacious group that revels in making the game ugly. The Cavaliers cannot let this team off the hook by walking the ball up the floor. Push the pace, look for mismatches, and let the superior firepower takeover.