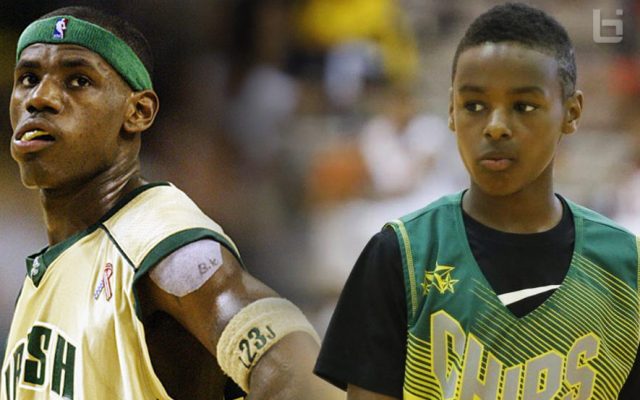 The basketball skills of Cleveland Cavaliers forward LeBron James had turned him into a teenage prodigy, who was good enough to be featured on the cover of Sports Illustrated as a junior in high school. Those talents appear to have been enhanced when it comes to his 12-year-old son, LeBron James Jr., if the opinion of the elder James matters.

The most recent instance of James Jr. putting his burgeoning talents on display came at a recent weekend tournament in Texas. Competing as part of John Lucas All-Star Weekend, the younger James mirrored his father’s ability to almost effortlessly pass the ball to teammates.

James spoke with Chris Fedor of Cleveland.com and noted that his son has already surpassed the handling and shooting talents he had at a similar age:

“I didn’t handle the ball as well as he does,” James said. “He handles the ball exceptionally and he shoots it a lot better than I did at that age, but I’ve always had the ability to pass the ball. It’s good to see him doing it as well.”

Over the course of his 14 seasons in the NBA, James has averaged 7.0 assists per game, but has ramped up his game in that area this year by reaching a career-high 8.9 per contest.

James pointed out that his son’s maturity when it comes to passing the ball is a rarity at the level he’s currently playing:

“It’s probably the best part of his game and I grew up playing basketball, playing AAU ball and watched a lot of kids kind of hog the ball,” James said. “Not pass the ball and things of that nature and I was never one of those kids. I always liked seeing my teammates excited about getting the ball and making a shot so to see him doing the same thing, it’s a pretty unique trait for a kid his age.”

Despite having his father as his closest role model, James Jr.’s favorite player is Oklahoma City point guard Russell Westbrook, which explains why he wears the No. 0 instead of his father’s iconic No. 23.

Though James Jr. may eventually follow in his father’s footsteps and play in the NBA, the current rules (which weren’t in place when his father completed high school) dictate that he must spend one year in college prior to playing in the NBA. James Jr. allegedly already has basketball scholarship offers from both the University of Kentucky and Duke University, though neither is official at this time.