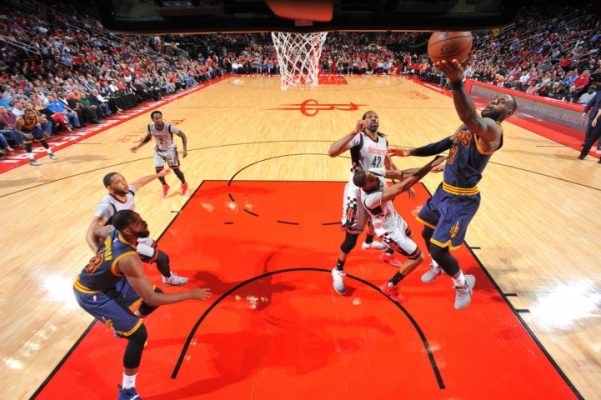 (Houston, TX) – The combination of numerous turnovers, getting dominated on the offensive glass and some late fatigue resulted in the Cleveland Cavaliers closing out their three-game road trip with a 117-112 loss to the Houston Rockets at Toyota Center on Sunday night.

The Cavaliers, who committed 15 turnovers in the contest, were on the short end of a 20-4 statistic in the offensive rebounding department and only made it to the foul line 13 times, compared to 28 attempts for the Rockets. All of those numbers along with playing their third game in four nights took a toll on the team, which helped drop its season record to 43-22.

“A team like that, you can’t give them 20 offensive rebounds,” Cavs head coach Tyronn Lue said after the game. “We just need to box out better. That’s basketball 101.”

LeBron James and Kyrie Irving combined for 56 points, with James adding seven rebounds and five assists, while Irving added eight assists to the team’s total of 24 on the night. The only other Cavalier to score in double figures was Richard Jefferson, who scored 12 of his 16 points within a span of just three minutes in the second quarter on a quartet of 3-pointers.

“A lot of threes, a lot of crazy bounces and they were crashing the glass,” James said in attempting to explain the defeat.

In the first quarter, the Cavaliers actually outshot the Rockets from the field, but the home team was deadly with their three-point game and held a 33-26 lead by the time the period had ended. However, the tables turned in the second quarter when Cleveland outscored Houston, 41-25, using its three-point prowess to connect seven times from long-range.

Jefferson’s long-range outburst had sparked the Cavaliers during the second quarter, allowing them to go on a 37-16 run before the Rockets closed their deficit to nine at 67-58 by the time intermission arrived. During the period, the Cavs hit on 71 percent of their shots from the field.

“We competed, played hard, but I thought we got tired down the stretch,” Lue said. “Given all that, I was pleased with the way we played.”

After the break, Cleveland cooled off considerably and continued to be dominated on the offensive side of the glass. That resulted in the nine-point lead eventually disappearing and Houston heading into the final quarter holding a 90-86 advantage.

“No lead is safe, especially when you’re playing those guys,” Irving said. “Right now, we’ve hit a rough patch, but once we get on the same page and hold each other accountable, we’ll be fine.”

The loss now reduces the Cavaliers’ precarious lead for best record in the Eastern Conference, though Lue didn’t appear worried about the tightening race:

“I’m not concerned, they have to catch us,” Lue said. “To be a championship team, you have to win on the road.”

After their three straight games on the road, the Cavaliers get to briefly enjoy some home cooking with games at Quicken Loans Arena on Tuesday and Thursday. The first of those contests is a rematch of last week’s Central Division battle with the Detroit Pistons. Tipoff for that clash will be just after 7 p.m. ET.

“Every week is important. There’s not one week that’s more important than another, there’s not one game that’s bigger than another,” James said. “That’s why it’s a long season, that’s why it’s a process. We’ll figure it out, we’re a team that’s capable of doing that. We’ve got a couple home games, but we knew March was going to be a tough month when we saw the schedule.”