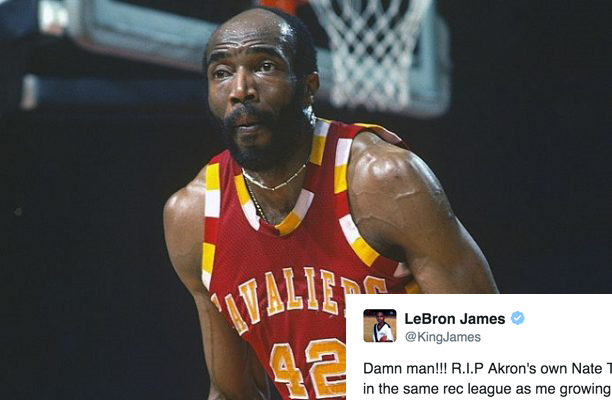 Nate Thurmond, who grew up in Akron and played a key role on the Cleveland Cavaliers’ first playoff team, died Saturday morning at the age of 74 after a short battle with leukemia.

Thurmond, who spent the bulk of his Hall-of-Fame career with the San Francisco/Golden State Warriors, played with the Cavaliers from 1975-77. He had been acquired from the Chicago Bulls on Thanksgiving Day 1975, a move done to shake up what had been a disappointing Cavaliers squad.

Thurmond’s presence and leadership proved to be a key component in helping the Cavs catch fire for the remainder of that season. The legendary “Miracle of Richfield” season commenced, with Cleveland reaching the playoffs for the first time in their six-year history.

During those playoffs, Thurmond was thrust into a starting role after starting center Jim Chones broke his foot just prior to the Eastern Conference Finals. Putting up an effort much like LeBron James did in 2015, Thurmond and the Cavaliers fell to the eventual champion Boston Celtics in six games.

“We had the best team in the league in the second half of that season,” Thurmond said just six weeks ago during an interview with Tom Reed of Cleveland.com. “We were denied our due, there’s no question about it. Just thinking about Chones’ injury almost makes you want to cry. I’m still trying to swallow that one.”

The following year, Thurmond’s career appeared to be over when he suffered a knee injury early in 1977. However, he took the court for one final game when he entered Game 2 of the first round of that season’s playoffs. His efforts temporarily staved off the Cavs’ elimination.

After retiring a few months later, Thurmond was honored on December 18, 1977, when the Cavaliers retired his number. He then went back to San Francisco to work for the Warriors, though he never forgot his time with the Cavs.

“I loved my time in Cleveland…I can still remember sitting in the locker room 20 minutes before a playoff game and hearing those fans stomping their feet. My late brother, Ben, used to bring a tape recorder to the Coliseum just to capture the noise.

“It was so loud in that old building that (coach) Bill Fitch had to hold the huddles on the court because nobody could hear him on the bench.”

James, who like Thurmond, is from Akron, took time to pay tribute to him:

Damn man!!! R.I.P Akron's own Nate Thurmond. Knowing u played in the same rec league as me growing up gave me hope of making it out! Thanks!