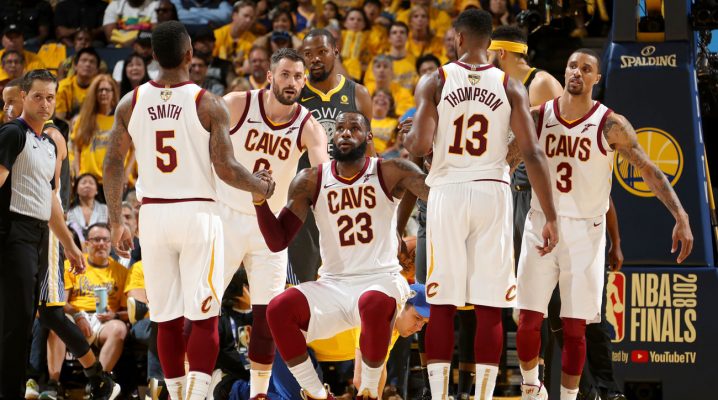 By this point, the only player LeBron James is regularly compared to in terms of greatness is Michael Jordan. There was a time in his career, however, that James wasn’t only compared to Jordan, but also to Los Angeles Lakers legend Kobe Bryant.

For most fans, James has easily surpassed Bryant when it comes to greatness and career accolades, but some still feel like Bryant has the edge because of his five career championships. One of those individuals who thinks James has more to prove on the court seems to be Bryant himself.

In a recent interview with the New York Times, Bryant seemed to question James’ impact on the court by arguing that his supporting cast is more than enough to succeed in today’s NBA.

“It seems like he has some good talent to me,” Bryant said. “He’s got (Kyle) Korver who’s a great shooter, J.R. Smith who has always been a solid player — we focus on his one mistake and that tends to overshadow all the things he’s done to help them win a championship before — you’ve got Kevin Love, who was an All-Star and an Olympian; Rodney Hood, who was a 17-point scorer in the Western Conference; you’ve got Tristan (Thompson) who is back to playing like he played a few years ago. He’s got some workable pieces there. I don’t understand how, in order to talk about how great LeBron is we need to [expletive] on everybody else. That’s not O.K. Those guys have talent. I don’t buy this whole thing that he’s playing with a bunch of garbage.”

He also argued that fans should expect James to play with the guys on his team, rather than make excuses for him.

“From my experience, you go with the dogs that got you to the dance,” he said. “Jordan Clarkson has a lot of talent and potential, I’ve played with him and know what he can do. Rodney Hood was a 17-point-per-game scorer in the West, so I’m supposed to believe he can’t play all of a sudden? It’s just a matter of what the team chemistry is and the team dynamics are. From the outside looking in, all we can do is speculate. I’m not Ty Lue, and I’ve known Ty forever and I know there’s certain reasons why he does things. He has the finger on the pulse of what that team is doing, and as an outside observer you kind of just got to go with that flow.”

On the surface, Bryant’s argument may have merit, but it is hard to see his reasoning when you consider the fact that the the Golden State Warriors not only have multiple All-Stars on their roster, but multiple league MVPs.

His argument loses even more credibility when you remember the talent Bryant himself enjoyed on his championship-winning teams. Not only was he led by arguably the greatest NBA coach of all time in Phil Jackson, he played alongside stars such as Shaquille O’Neal, Dwight Howard, Andrew Bynum, Pau Gasol, Lamar Odom, and more during his illustrious career.

It is also somewhat ironic for Bryant to defend the Cavs’ current role players considering the fact that when he felt his roster wasn’t up to par in 2007, he demanded a trade from the Lakers.

Perhaps the argument that James could do more with the roster he plays with is a legitimate one, but in today’s NBA it seems nearly impossible to win a championship without at least three All-Stars.

Bryant may have point in this argument, but it is also quite possible that the NBA has simply passed him by.