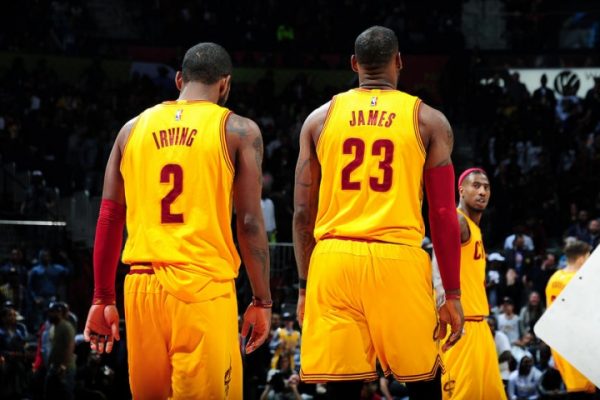 (Atlanta, GA) – A combined 81 points from Kyrie Irving and LeBron James helped the Cleveland Cavaliers escape a potentially devastating collapse as they picked up a 135-130 victory over the Atlanta Hawks at Philips Arena on Friday night.

Irving’s six free throws in the final 25 seconds were needed to clinch a game in which the Cavaliers once held a 25-point advantage. After a third quarter lead of 92-67, the Cavaliers watched the Hawks make it a one-point contest at 124-123 with 1:32 left. Kyle Korver stopped the bleeding on a 3-pointer with 1:17 remaining. Then, after two separate misses by the Hawks, Irving’s layup with 28.2 seconds left pushed the margin back up to six.

“The game slowed down. They started getting to the foul line,” Irving said. “They do a great job of playing the inside-outside game.”

Ending the night with 43 points and nine assists, Irving was joined by James, who managed a double-double with 38 points and 13 rebounds, nearly capturing a triple-double by handing out eight assists.

The dramatic finish overshadowed a record-setting night as the Cavaliers bombarded the Hawks with 25 3-pointers, establishing a new single-game regular-season record in that category. Coincidentally, the Cavaliers also set the postseason record for 3-pointers in a game with 25 against the Hawks in Game 2 of last year’s Eastern Conference semifinals.

“We probably could have had more if we would have taken good shots. We got up 25 and just got comfortable, started messing around with the game, took some bad shots,” Cleveland head coach Tyronn Lue said. “We just didn’t respect them down the stretch when we got up 25. We’ve got to be better than that, especially going into a back-to-back. Not finishing off the game the right way was disappointing.”

James had six of the 3-pointers, followed by Irving with five, with four other Cavs players hitting three triples and Iman Shumpert knocking down a pair. The only other Cleveland players to finish scoring in double figures were Channing Frye and Richard Jefferson, who each contributed 11 points.

“They got into a great rhythm, but we turned the ball over in the third quarter,” James said. “We’ll clean that up. We have to be better than that.”

With the exception of two early ties, the Cavaliers held the lead throughout the game, scoring 77 points during a torrid first half. Over the course of those two quarters, the Cavs connected on 65 percent of their shots from the field, including 61 percent from 3-point land.

“We had 31 assists,” James said in response to how the Cavaliers were able to connect for so many 3-pointers. “When the ball has energy, it’s great to see.”

Raining down 14 3-pointers on Atlanta during the first half, Cleveland was led in that department by both James and Irving, who each connected three times. During the first two periods, they combined for 45 points, with Irving hitting on 10-of-12 from the field.

“When guys are getting to their spots, it breeds that great energy that you need out there,” Irving said.

That surge continued for the Cavaliers after the break as they turned a 77-60 halftime lead into that 92-67 advantage. The Hawks managed to reduce the margin to 13 with less than three minutes left in the third period before the Cavs got back above 20. That seemed to be enough cushion until the fourth quarter drama took center stage.

“They started making shots and attacking the basket. We probably settled for few too many jumpers,” Korver said immediately after the game. “It’s a hard thing to play with the lead and it’s something that we’ve struggled with lately. You find ways to win in the end.”

The Cavaliers now travel to face the Miami Heat in a game on Saturday night that will tip off just after 8 p.m. It will be the first of two consecutive games against the Heat, with the return matchup taking place at Quicken Loans Arena on Monday night.