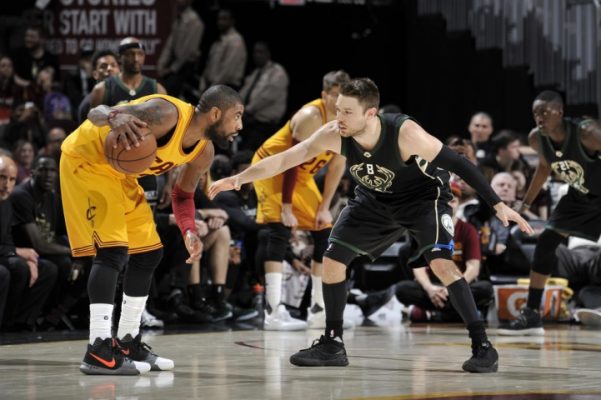 (Cleveland, OH) – Clutch play in the final five minutes that saw the Cleveland Cavaliers run off 11 unanswered points helped them hold off the Milwaukee Bucks, winning by a 102-95 score on Monday night at Quicken Loans Arena.

The Cavaliers were clinging to an 86-85 lead at the five-minute mark before the final surge began. LeBron James delivered a rousing dunk, with Kyrie Irving then taking advantage of two missed free throws by the Bucks by connecting on a basket. Following a Tristan Thompson block, Irving then notched a 3-pointer to make it 94-85 with 3:38 left. For good measure, Irving then assisted on a Derrick Williams 3-pointer from the right corner with 2:38 remaining to put the game away.

“Tristan’s been great for us on defense, since he’s been getting in the right spots,” Cavs head coach Tyronn Lue said. “That block was a big play for us.”

Irving finished with 25 points and missed a double-double with nine assists, while James did accomplish that feat with 24 points and 10 boards, adding six assists to the mix. Richard Jefferson was the only other starter to score in double figures, contributing 11 points, which was actually less than the production from Williams’ 14 and Kyle Korver’s 13 points. Williams also added seven rebounds to continue his effective play since joining the team.

One person lamenting the end of the month was James, who noted the team’s 9-2 record for February.

“February’s over, it sucks,” James said. “We had a great month.”

James was back in action after missing Saturday’s contest due to strep throat. He showed no ill effects from the issue, which wasn’t surprising to Lue:

“That’s who he is, he just brings so much to the team. We needed his juice tonight,” Lue said of James. “The way he can defend, the way he can shoot, the way he gets his teammates involved in the game.”

Asked about whether he thought about postseason awards during the course of the year, James pointed at one of the key statistics in his career, but was reluctant to promote himself as a candidate for the NBA’s 2017 Most Valuable Player Award.

“I just try to be the MVP on this team every night,” James said. “I don’t know, just look at my winning percentage. That’s all that really matters.”

During the first half, the ups and downs of the Cavaliers were clearly evident, jumping out to a 17-6 lead before then watching the Bucks put together a 15-3 run. Milwaukee went through a stretch where it made 12-of-16 shots from the field before missing 13 of its next 16 attempts, with Cleveland holding a 52-50 halftime lead.

Another rollercoaster period awaited both teams in the third as the Bucks started out on a 13-4 run, only to watch the Cavs answer with 13 unanswered points in less than three minutes. Williams’ 30-foot buzzer beater gave Cleveland a 77-73 entering the final quarter.

“When you’re playing against a divisional team, it’s going to be a tough game,” Irving said after the game. “But we were able to close it out in the fourth quarter and got the stops when we needed it.”

Having dealt with injuries all season, Cleveland was the unfortunate beneficiary of one suffered during the game by Milwaukee. In the second quarter, the Bucks’ Michael Beasley had scored 11 points in just eight minutes before leaving the game for good with a sprained knee.

“Our potential is through the roof because we can form so many lineups.” Irving said. “It’s exciting. We still have to get used to one another, know what to expect. I feel when we get that down and get to the playoffs, we’ll be in a good spot.”

The Cavaliers now head into March facing a tough stretch in which 12 of their 17 games during the month will be on the road. The first takes place on Wednesday night, when they travel to Boston to face the Celtics in a nationally televised game that will get underway just after 8 p.m ET.