Cleveland Cavaliers vs. Boston Celtics Game Recap: Cavs One Game Away From Sweep 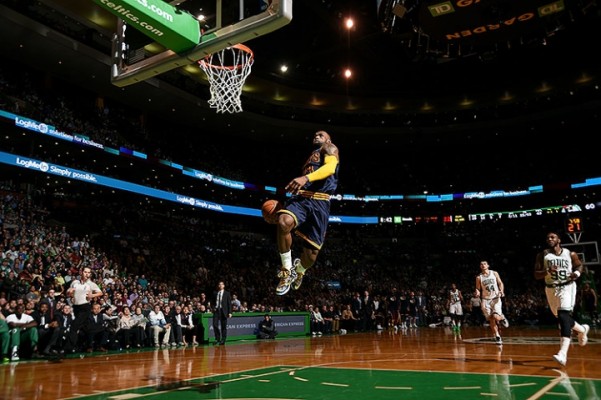 (Boston, MA) – Thanks to a combined 54 points from LeBron James and Kevin Love, the Cleveland Cavaliers now stand one game away from advancing to the Eastern Conference semifinals as they won a hard-fought 103-95 road decision over the Boston Celtics Thursday night at the TD Garden.

James collected a double-double with 31 points and 11 rebounds, while Love added 23 points, connecting for six three-pointers on the night. Two of those threes came in the final minutes of the game and helped put a dagger in the Celtics’ comeback hopes, the latter going through the net with 26.7 seconds left to give Cleveland a 101-93 lead.

Cavs head coach David Blatt was asked about Love’s performance after the game and said, “Overall, Kevin’s been great. He’s been engaged on both ends and he’s in the moment.” Blatt also noted that James’ main motivation wasn’t necessarily to beat the Celtics, saying, “I think the playoffs matter more to him. He’s just so locked in by his demeanor and performance.”

After the game, James talked about the determined effort of his teammates, saying, “We had adversity and we responded, and they did a heck of a job.” When asked about why he’s been able to put up such great playoff games in Boston, James said, “It’s the fans, it’s the adversity. They don’t like me here.”

Unlike the first two contests, the Cavaliers held the early edge and were able to maintain it for much of the quarter. Jumping out to a 7-2 advantage, the Celtics were able to knot the score twice, the last time coming at 19 with 3:11 left in the first quarter. This time a 12-6 run provided the Cavs with a 31-25 lead as the horn sounded.

The lead might have been higher, but Love and Tristan Thompson each missed three free throws apiece. However, the Cleveland defense held Boston to just 44 percent outside shooting and coughed up the ball just once.

“We wanted to come out and hit first,” said Love afterward, who added, “We’re figuring things out on the fly, and tonight was a great test for us.”

In the first few minutes of quarter number two, the Cavaliers built up a nine-point lead at 36-27. However, after taking a 38-31 advantage, the Celtics ran off nine unanswered points until J.R. Smith tied things at 40.

Some feverish play on both sides followed for the next few minutes, with Boston taking its biggest lead of the half at 48-44 with 2:24 to go before the break.

At that point, the Cavs shut down the Celtics and closed the half with 12 unanswered points for a 56-48 lead. Half of those points came from James, who notched the last six on a pair of jumpers and two flagrant foul shots.

When players returned to the court, it was Boston that moved quickly by scoring the first eight points to deadlock the game at 56 apiece. Cleveland would quickly get the lead back on a three-point play from James, and was able to maintain it.

The Celtics got within a point twice, the last time coming at 67-66 with just under seven minutes to play. However, the Cavaliers ran off 10 straight points, paced by a pair of threes from Irving, and held a 77-66 advantage.

Boston would chip away to get the margin down to five, but by the end of the quarter, the Cavs’ lead was back to where it was 12 minutes earlier, with an eight-point spread at 84-76. The Cleveland cushion would go to 11 at 89-78 in the first three minutes of the final quarter.

With 4:35 to go, Irving’s layup made it 95-87, but the Celtics charged back to score five straight points. However, Love then connected on the first of his two clutch treys, this one coming after Irving’s layup missed. Thompson deflected the ball to Love in the left corner to make it 98-92 with 2:13 left and put Boston in a huge hole that effectively ended the game.

“This was our first test on the road and we handled it well, guys stepped up,” said Irving.

Celtics head coach Brad Stevens gave credit to the Cavs in postgame comments, saying, “I thought they really played with poise and control, and that was the difference in the game.”

Blatt talked about the team’s confidence in this series by saying, “We have players that have been in these type of games. We’ve shown maturity and poise.”

The Cavaliers will try for the sweep in a nationally televised game on Sunday beginning at 1 p.m.