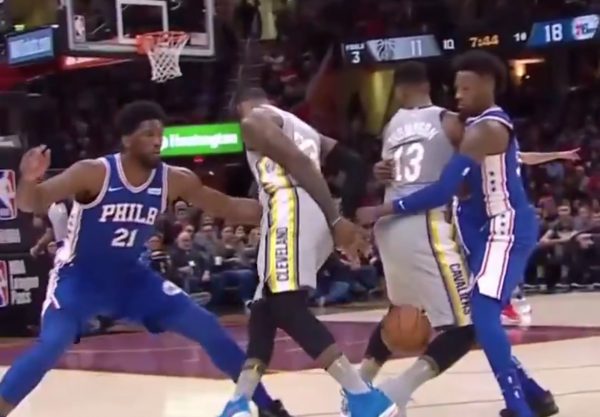 It’s no secret that LeBron James can achieve things on the basketball court that very few other people in the history of the sport can replicate. In Thursday night’s game against the Philadelphia 76ers, James proved that fact when he dazzled a packed crowed at Quicken Loans Arena with a jaw-dropping display of dribbling ability.

Midway through the first quarter, James put 76ers big man Joel Embiid on skates when he put the ball behind his back and began his drive to the basket.

It wasn’t until after fans got a closer look at the replay that they understood just how impressive the play was. Not only did James put the ball behind his back, but he also put it between Tristan Thompson‘s legs in a play that demanded a little bit of luck and a whole lot of skill.

The four-time MVP went on to draw the shooting foul before completing the score for a chance at a three-point play. While that might have been the highlight of most plays, the behind-the-back, through-the-leg dribble was truly a one-of-a-kind performance.

That Cavs are trailing late in the first quarter, but have more than enough time to claim the lead. If James keeps completing plays like this one, it’ll be hard for the Cavs not to get the win.