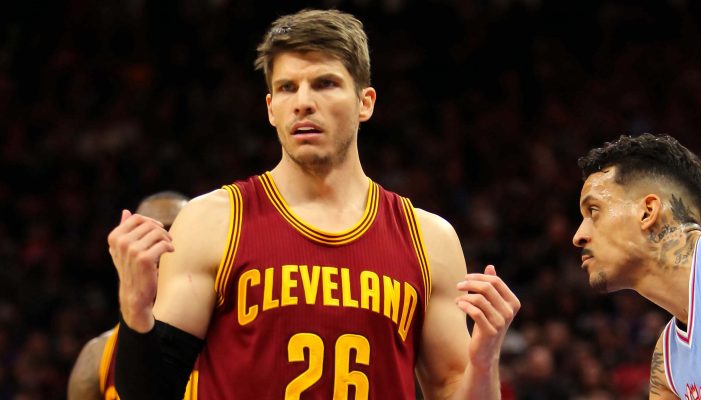 The Cleveland Cavaliers appear to have dodged a bullet with respect to veteran Kyle Korver, with news that he has sustained no ligament damage from a knee injury suffered late in Saturday night’s loss to the Chicago Bulls. However, his status for Monday night’s home game versus the Milwaukee Bucks is still undetermined.

Joe Vardon of Cleveland.com noted that Korver’s injury came with 2:59 left in the contest:

“As for Korver, he said he landed ‘straight legged’ on his right leg with 2:59 left in the game and then had his knee hit. He stayed down on the court and was attended to before slowly standing and limping to the locker room.

“Korver returned to the bench, and afterwards said the Cavs training staff tested his knee and there was no ligament damage. He said no imaging was done.”

Noting that he was very concerned about the potential ramifications of a knee injury, Korver spoke about the immediate aftermath of the injury following the game:

“I didn’t know what it was going to feel like when I stood up,” said Korver. “I was really worried. I don’t like to stay down on the ground long, but it just, until I put weight on it I didn’t really know. I’m feeling very fortunate right now. It could’ve been worse.”

While playing for the Atlanta Hawks against the Cavaliers during the 2015 NBA Eastern Conference Finals, Korver suffered a high ankle sprain that ended his season. That injury came during a collision with former Cavs reserve point guard Matthew Dellavedova.