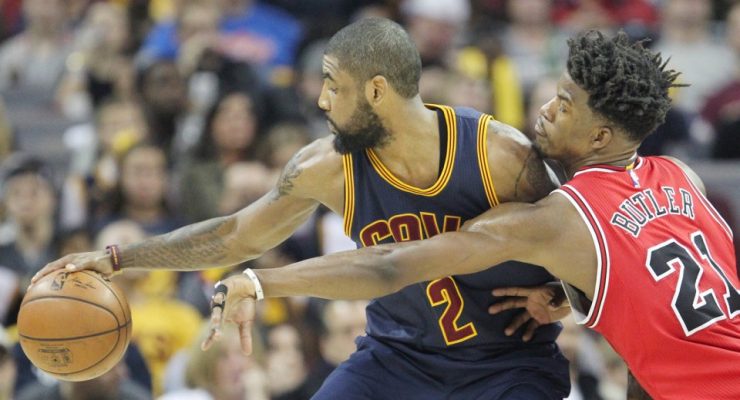 (Cleveland, OH) – Despite a strong night from Kyrie Irving, a disastrous third quarter proved to be the undoing of the Cleveland Cavaliers as they fell to the Chicago Bulls by a score of 117-99 at Quicken Loans Arena on Saturday night.

Irving ended his evening with 34 points, nine rebounds and seven assists, with his point total combining to surpass the other four Cleveland starters. Playing without LeBron James, who sat out the game due to strep throat, the Cavs couldn’t put together a comeback after watching a six-point lead early in the second half quickly disappear. The loss now puts Cleveland’s record without James in the lineup over the past three seasons at 4-19.

The Cavs had led 65-59 with 9:16 left in the third quarter before then watching the Bulls take off on a 17-2 run that gave them a 76-67 advantage with just over five minutes to go in the period. Chicago eventually boosted its lead to 14 at 87-73 before James Jones’ 3-pointer in the closing seconds sliced the margin to 11 with one quarter left.

Cold shooting was the main culprit during the Cavs’ dry spell, as they managed to connect on just 25 percent of their attempts from the field after taking that six-point lead. An inability to also stop the Bulls’ Jimmy Butler, who had 13 during the period and ended up with a triple-double on the night, was another issue.

“We played well in the first half,” Cleveland head coach Tyronn Lue said. “I don’t know if we got tired, but we didn’t play good defense.”

The problems continued during the first three minutes of the fourth, with the Bulls forging an 11-2 surge that gave them a commanding 20-point lead at 98-78. While the Cavaliers were able to cut their deficit in half, they couldn’t get any closer.

Two key factors played a role in the loss: getting dominated on the offensive glass, with Chicago holding a 10-2 advantage in that category, and the Bulls hitting a season-high 15 3-pointers.

“I thought we competed, but they had a little more than us,” Lue said. “Especially when Jimmy Butler got going and Dwyane Wade almost had a triple-double.”

Defense kept the scoring down during the first quarter, but both teams got hot in the second period. Chicago connected on 65 percent of their attempts from the field and Cleveland was slightly warmer at 67 percent, with both teams especially effective from long-range, hitting a combined 11 3-pointers.

The Cavs received a scare with roughly three minutes to go in the contest when Korver limped off the court after holding his knee following a collision under the Bulls’ basket.

“He said he felt okay, but he hasn’t been checked out by the doctor yet,” Lue said.

The Cavaliers will stay home for their next matchup, a Monday night contest against the Milwaukee Bucks that will get underway just after 7 p.m. Following that contest, they’ll be on the road for a good portion of March, with 12 of their 17 contests away from Quicken Loans Arena.