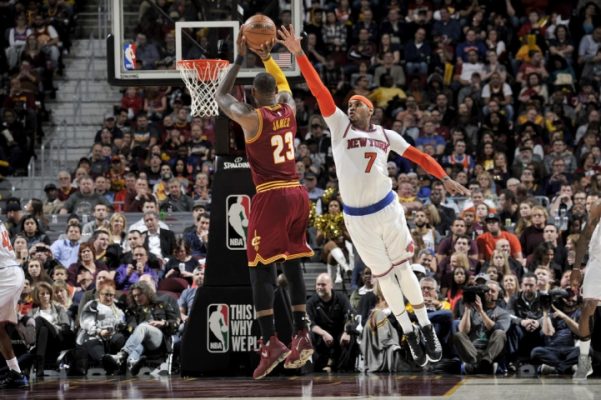 (Cleveland, OH) – Kyrie Irving’s 23 points and a triple-double from LeBron James helped the Cleveland Cavaliers resume their groove, picking up a 119-104 victory over the New York Knicks at Quicken Loans Arena on Thursday night.

Irving and James were part of a seven-player group for the Cavs that scored in double figures, with Irving also adding six assists to his numbers on the night. However, James was dominant in all areas, finishing with 18 points, 15 assists and 13 rebounds.

“I had to get our guys involved, especially the second group,” James said about his assist total. “But those guys still had to make the shots.”

Kyle Korver came off the bench to score 20 for Cleveland, a performance that included six 3-pointers. Channing Frye and Richard Jefferson each ended their night with 14 points, while Tristan Thompson and Derrick Williams each contributed 10 points. Thompson was again a force on the glass with 14 rebounds, giving him another yet double-double.

Cleveland’s bench played a key role, outscoring New York’s reserves by a 49-26 advantage. Meanwhile, the Cavs’ defense was well represented with 10 blocked shots on the night.

During the first quarter the two teams mostly traded baskets as the Cavs allowed the Knicks to shoot 50 percent from the field. Things changed dramatically in the second period as New York managed to hit just 28 percent of its field-goal attempts and committed five turnovers.

In contrast, the Cavs had solid ball movement in the second, collecting assists on all but one of their 12 baskets. They also hit 55 percent from the field, including 50 percent from long-range and pushed their halftime lead to 69-51 on the basis of a 12-2 run at the end of the quarter.

After the break, the Knicks were able to reduce their deficit by the end of the third to eight at 87-79. That was primarily due to 11 unanswered points early in the period and an 11-5 run in the final four minutes. They also dominated the boards, holding a 15-7 advantage and limited the Cavs to just 41 percent from the field in the third quarter.

Any thoughts of a dramatic Knicks comeback ended with a 12-2 Cavaliers run to start the fourth quarter. Cleveland boosted its lead to as much as 19 at 110-91 by connecting on 9-of-12 from the field to start the period. By the time the game had ended, its fourth-quarter shooting percentage stood at 65 percent.

“We just want to continue to play the way we’ve been playing in February,” James said. “We have to continue the process over the result of the regular season so that we’re ready for the playoffs.”

Cavs head coach Tyronn Lue was asked after the game about possible roster moves now that the trade deadline has passed, with Lue expressing satisfaction with the current squad.

The Cavaliers will remain at home for a Saturday night clash against the Chicago Bulls. Due to the game being nationally televised on ABC, tipoff for the game will be just after 8:30 p.m.