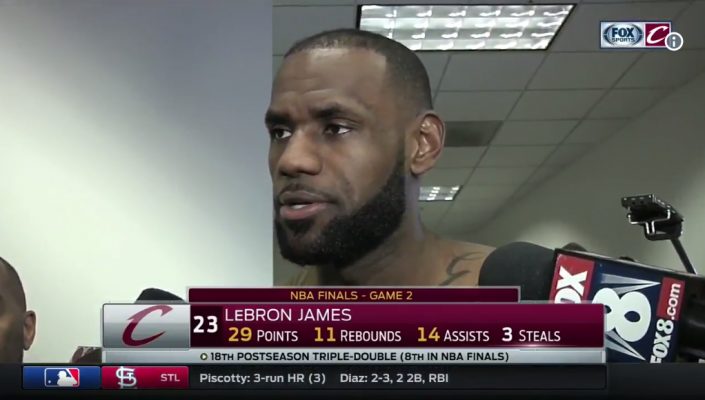 Immediately after the Cleveland Cavaliers‘ 132-113 loss to the Golden State Warriors in Game 2 of the 2017 NBA Finals, Cavs superstar forward LeBron James answered questions in the visitors’ locker room with members of the media.

One reporter asked James a question about if the Cavs must defend home court when they return back to Cleveland.

James had the perfect response to what seemed to be a pretty dense question, considering no team in NBA playoff history has ever come back from 3-0 deficit to win a series.

A reporter asks if the @Cavs need to defend home court and, well, let LeBron James take it away. #NBAFinals pic.twitter.com/6KeEIVtj9s

In Sunday night’s loss, James tied Los Angeles Lakers legend Magic Johnson for most career triple-doubles in NBA Finals history with eight, as he led Cleveland with 29 points (12-18 from the field and 4-of-5 from the charity stripe) to go along with 14 assists, 11 rebounds, three steals and one blocked shot.

Awesome to share the most triple doubles in NBA Finals history with the future HOF @KingJames.

The Cavs again struggled mightily on defense and didn’t have much of an answer for Warriors superstar forward Kevin Durant and two-time regular season MVP guard Steph Curry, who had 33 and 32 points for Golden State, respectively.

Facing a 2-0 series deficit against Golden State for the second year in a row, Cleveland will return home to Quicken Loans Arena on Wednesday night for a must-win Game 3 showdown.