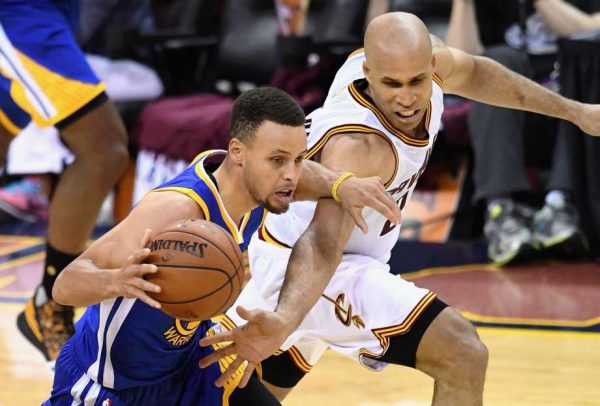 Every time the Golden State Warriors and Cleveland Cavaliers face off, the league’s best rivalry seems to elevate to new heights — even when the results are as lopsided as they were in last night’s 126-91 Warriors rout.

There’s now so much baggage between the two teams that even if nothing new happens, players can still pick at old wounds. That’s what happened on the first episode of the Road Trippin’ Podcast, when Richard Jefferson discussed the controversial comments Warriors guard Stephen Curry had made last year about the Cavs’ locker room still smelling like champagne:

“In his dad’s era, if his dad would’ve said ‘I hope that another team’s locker room smells like champagne,’ in the era of Charles Oakley and Anthony Mason, there would’ve been fights,” Jefferson said.

Jefferson was not a member of the 2014-15 Cavs team that lost to the Warriors in six games in the NBA Finals, but he seems to have taken Curry’s comments quite personally, still hanging on to them a year later.

Despite the somewhat threatening nature of Jefferson’s comments, he insists that it’s just in good fun, and that the Warriors are participating too:

“This is going on in both sides,” Jefferson said. “This is not just Cleveland getting on them. It’s just playful banter that’s going back and forth.”

The 36-year-old veteran is definitely correct given that Warriors guard Klay Thompson called LeBron James and the Cavs “childish” last week. But the forward, a former Warrior himself, also made it clear that it is all love between him and Curry, as long as they aren’t on the same court:

“I have no disrespect for Steph,” Jefferson said. “I played with the guy, love the guy, I wish him the best. Unless they’re playing against us. Then after that, it’ll be a flagrant foul.”

It will be interesting to see how this latest sniping affects an already tense rivalry. If these comments do raise tensions even further, we won’t have a chance see it on the court until June. The Cavs and Warriors have split their season series, and if we see them face off again this season, it will be in an intense and exciting NBA Finals.