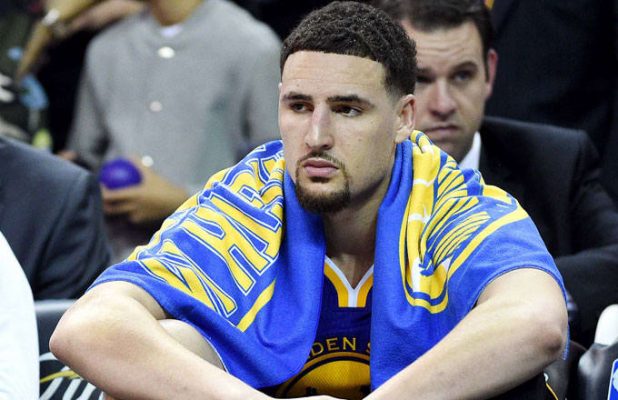 Ever since the Cleveland Cavaliers came back from  being down 3-1 to beat the Golden State Warriors in the NBA Finals, tensions between the two teams have been at an all-time high.

Those tensions reached a peak this past October when details leaked of a Halloween party thrown by Cavs superstar LeBron James. Pictures of the party were released and highlighted by a skeleton holding a drum that said “3-1 Lead” and cookies that were decorated as tombstones for Warriors guard Klay Thompson and his teammate Stephen Curry. In addition, word came out that guests had to step over a dummy of Curry in order to enter the party.

During a recent appearance by Thompson on the A to Z Podcast with Sam Amick and Jeff Zillgitt, the All-Star guard attempted to take the high road when addressing the shade from James and the Cavs, but couldn’t help but get a shot of his own in:

“It’s obviously not respectful, so it’s got to be on the other side of the spectrum, so that’s fine with us,” Thompson said. “They can do that childish stuff. It doesn’t matter to us. All we’ve got to do is handle it on the court, you know?

“No, it didn’t (come up on the court in the Christmas Day game). But shoot, it might have (to). I mean, I still think we need to play with more of an edge next time we see them … I mean when we won the championship, though, we didn’t do some stuff like that. But that’s OK. People are built differently. We’re not going to – I’m not going to hold it against them. I’m just going to go out there, and we just want to beat them down next time we see them. That’s how it is. Hold that in the memory bank, and just remember that they do that stuff…It’s a good rivalry, and it’s good for the NBA. It makes it more fun, you know? It’s rare in pro sports you get rivalries like this, so we enjoy it, and we embrace it.”

Thompson and the Warriors get a chance to back up their trash-talking on the court, as they face off against the Cavs on Monday night at Oracle Arena.