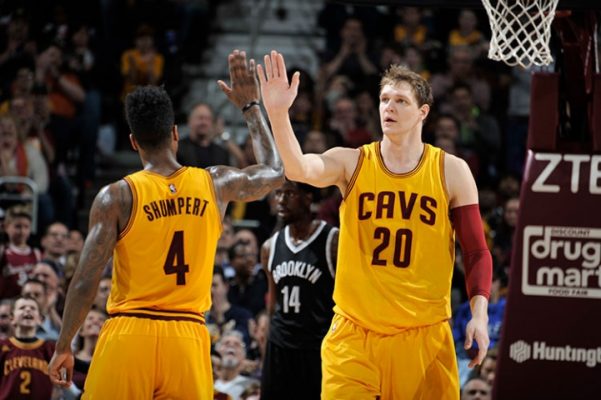 The Cleveland Cavaliers need a change somewhere. That much is apparent, after the Cavs fell 2-0 to the Golden State Warriors following a 110-77 blowout in Game 2 of the 2016 NBA Finals Sunday evening.

But what those changes could be have been a little unclear to those both inside and outside of the Cavs organization.

Then Tuesday after practice, head coach Tyronn Lue indicated that he may start to tinker with the lineups on the court, as Jason Lloyd of the Akron Beacon Journal reported.

Ty Lue says Cavs coaches have discussed lineup changes, but he's not revealing what, if anything, will change

So again, some changes are coming, but they still remain a little hazy. While purely speculative at this point, here are a few of the changes that Cavs fans may witness Wednesday evening during Game 3.

The biggest — quite literally — change that the Cavs are likely to make is increasing the role of veteran center Timofey Mozgov. Mozgov did start 48 games this season for the Cavs, but has seen his role reduced to essentially garbage-time minutes after Lue took over for David Blatt midway through the season. Mozgov was a force on the glass during last year’s NBA Finals, where he averaged 14.0 points and 7.5 rebounds per game. He also posted three double-doubles in those six games.

Especially with the possible absence of Kevin Love for Game 3 due to a concussion suffered in Game 2, Lue even indicated that a larger role was in store for Mozgov.

“Timo has to be ready,” said Lue. “There’s a chance and opportunity for him to play, we’ve talked about that as a staff. He just has to be ready, and we’ll see what happens from there.”

While Kyrie Irving and LeBron James are assuredly going to be getting their regular dosage of minutes, it seems as though Lue is willing to leave the other three spots up for grabs.

Iman Shumpert will likely be the beneficiary should Lue decide to make a change at this position. Shumpert, already an elite NBA defender, has recently seen a reduction of his minutes in the playoffs, but Lue was quick to put Shumpert back into the contest early in the third quarter of Sunday’s loss, even before his usual choice of Matthew Dellavedova. Shumpert has buried a triple in each of the first two games of this series, and with him on the floor this season, opponents’ offensive rating has dropped from 105.8 to 102.4, a relatively significant difference.

The decision makes sense when considering that Shumpert has produced six points on just four shots while Dellavedova and Smith have combined to produce just 17 points on 21 shots in the first two games of the finals.

Should Love not be available, and should Mozgov’s role increase, Channing Frye will also likely see more time on the floor. In fact, Sports Illustrated has speculated that Frye is the most likely candidate to replace Love in the starting lineup.

Frye’s role has been reduced in the NBA Finals, largely because of a bad matchup when the Warriors play their most potent small-ball lineup. With Mozgov on the floor, the Cavs will need to find some more spacing while not losing any length, which is where Frye fits in perfectly. The 6’11” power forward has drilled 26 total 3-pointers in the playoffs, and currently leads all players with an effective field-goal percentage of 79.4 percent.

Much has been made about how best to stop the Warriors’ “death lineup” of Stephen Curry, Klay Thompson, Andre Iguodala, Harrison Barnes and Draymond Green, but it seems the only effective counter has come from the Oklahoma City Thunder in the Western Conference Finals. Instead of trying to match the small-ball, OKC simply went huge by punishing Green and Barnes with players like Serge Ibaka, Enes Kanter and Steven Adams.

Should Lue follow this mold, the Cavs may throw out a crazy lineup such as Irving, James, Frye, Tristan Thompson and Mozgov. That would put four players over the 6’8” mark on the court for the Cavs while playing against just one player over that mark for the Warriors, which is Green.

Considering that the Warriors seem to find ways to get good looks regardless of who is playing defense, it would make sense to utilize a lineup that is guaranteed to limit Golden State to just one shot per possession, as well as being able to generate multiple shots on the other end due to a major advantage on the glass.

One thing is for certain, a few major changes are coming for the Cavaliers. And while Lue is currently keeping his poker face on and not revealing his plan, the cards will have to be shown Wednesday night, as Game 3 kicks off in Cleveland.

“It’s a do-or-die game for us,” said James following practice Tuesday. “We can’t afford to go down 3-0 to any team, especially a team that’s 73-9 in the regular season and is playing the type of basketball they’re playing. So we understand that. We’re going to come in and give everything that we’ve got and leave it on the floor.”